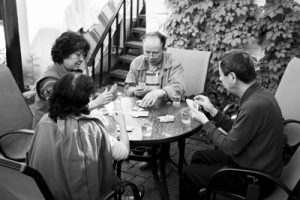 NSA CALLS FOR MORE CARE FOR A NEGLECTED AGEING GROUP

A startling new report claims that people from migrant backgrounds who may have been living in the country for more than 30 years, are not as well off as the native-born Australian.

The report, from the National Seniors Australia (NSA) Productive Ageing Centre, also found that aged Australians from such countries as Lebanon, Turkey and Vietnam have lower levels of social and economic wellbeing than other groups from culturally and linguistically diverse (CALD) backgrounds.

It also revealed that older Australians originally from Malaysia, Singapore, Hong Kong, India and Sri Lanka are better educated and have better incomes than other CALD groups.

The report, titled The Ageing Experience of Australians from Migrant Backgrounds, found that older Australians of Italian and Greek origins make up the two largest birthplace and language groups of CALD background.

NSA general manager policy and research, Peter Matwijiw, said the report was based on data from the 2006 census and highlighted a large and significant group of older Australians from CALD groups.

“Australia is a country built on immigration but it’s less well known that the migrant population has an older age structure than the Australian-born population”, Mr Matwijiw said.

“This report provides a detailed insight into the demographics of CALD Australians as well as assessing factors such as personal income, living arrangements, home ownership, level of education, English proficiency, their involvement in paid work and other factors.

“The results were very different dependent on ethnic background and cultural factors but overall we found that even while most have lived in Australia for more 30 years, they are not faring as well as those born in Australia in terms of social and economic wellbeing,” he said.

“Interestingly we found that older people from southern and eastern European and Asian countries were all more likely to be living at home and not in an institutional care facility than migrants from the English-speaking or western European countries and the Australian-born aged. We expect this is probably a result of cultural reasons,” he said.

Mr Matwijiw said one in five Australians aged 50 and over were born in a non-English speaking country.

“There needs to be better ways to increase English proficiency in older adults from non-English speaking backgrounds, including those who have lived in Australia for many years.

“We know that many dementia patients lose their ability to speak English and revert to their native language. This also raises some important points about whether health and other services need to be better tailored to meet the needs of CALD Australians,” Mt Matwijiw said.

He said it was now time to look at the findings through different policy and cultural lenses to help older Australians from various backgrounds to improve their ageing experiences.

Mr Matwijiw said that there was just not enough detailed research carried out in this country on the plight of the ageing migrant and he hoped his report would highlight some of the issues involved.

The NSA organisation reports that the Pensioner and Beneficiary Living Cost Index (PBLCI) rose faster than the CPI in the March quarter confirming that cost of living pressures are falling more heavily upon older consumers, particularly pensioners, when compared to the general community.

“These commodity forms are clearly necessities – not something that older Australians can cut back on,” NSA chief executive Michael O’Neill said.

“The Australian Bureau of Statistics (ABS) figures confirm the pressure pensioners and older Australians on fixed incomes are feeling and it’s not going to be any easier,” he said.

The ABS pointed to the Queensland floods and Cyclone Yasi for increases in fruit and vegetables particularly, higher petrol prices leading to more expensive transport and big hikes in electricity and rents forcing up housing costs.

The NSA said that a 2009 ANU study found that about 11 per cent of Australians aged 55 and over had to either dispose of assets or take out a loan in the previous 12 months to meet ongoing expenses— specifically because their current income was not sufficient.

“People will be chewing into their savings and having to make difficult choices about what they can and cannot afford,” Mr O’Neill said.

“With energy prices expected to soar even further this year, Governments at all levels need to look at how to ease the increasing cost of living for our pensioners and self-funded retirees on limited fixed incomes,” he said.

In a separate major initiative, northern NSW residents living with a chronic illness will be given the opportunity to boost their independence and monitor their condition as the result of a new partnership between Feros Care and the Northern NSW Local Health District.

According to the local health service, Feros Care is an innovative aged care service in northern NSW and south-east Queensland which is set to take their telehealth expertise into the homes of people living with diabetes, cardiac and respiratory disease.

Between now and December  this year, up to 15 people at any one time in the Tweed and Murwillumbah areas will be part of the trial service using the monitoring system for six to eight weeks.

Each home will be set up with telehealth equipment, including blood pressure monitors, finger pulse oximeters, thermometers, weighing scales, and a glucose monitor, depending on the patient’s needs.

Feros Care CEO Jennene Buckley said: “Our trained telehealth nurses will liaise with the individual to help assess their general wellbeing and vital signs in the comfort of their own home and in collaboration with the patient’s GP.”