Raising the flag on a burning issue 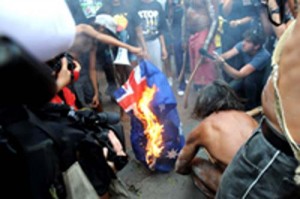 It’s been a couple of months now but still the anger simmers.

Had I really seen that horrific spectacle, here in my own country?

Surely I can’t have, because there was so little outrage, so few community leaders publicly condemning the sheer bastardry of the act. So little outpouring of fury that such an act was allowed to go unpunished.

Oh sure, there were the scattered letters from appalled readers in the newspapers, and, quite rightly, the RSL and the Vietnam Veterans came out and expressed their anger and there was scattered comment among the shock jocks’ talkback programs.

Some time has passed now and there have been some significant changes in the political arena but have we all forgotten what happened on that Australia Day back in January this year?

Most of the frenzied media coverage centred on the melodramatic “Rufus Youngblood-“style extrication of Julia Gillard from the clutches of the rampant mob and the subsequent loss of not only  her shoe but one of her trusted advisers who allegedly tipped off the protesters.

I know alot of time has passed since then, but I thought I’d wait to see if the anger in my soul would disappear, or even diminish and I would be able to express my deepest concerns.

You’re probably all sick in the guts with the whole unseemly spectacle that, like the Cronulla riots some years previously, bitterly marred the celebrations of our national day.

But I’m sorry to say the anger has not gone, nor has it diminished. As I sit down now to write this piece, it all begins to boil up inside me again.

Did I really see young children at the so-called Aboriginal Embassy in Canberra being encouraged to set fire to and to spit on the Australian flag?

Did I really see Aboriginal elders spurring the children on to fan the flames then stamp on the ashes of the charred emblem of our nationhood?

Did I hear them chanting and muttering threats against their own country?

Did I really see an Aboriginal elder using his ceremonial boomerang to stoke the flames which had engulfed our flag?

As I said, it’s been a couple of months now and maybe my memory is playing me tricks. Get over it you say to me!

Did I really see all that, here in my own country? Am I being foolish in expecting there to have been such an outpouring of rage over the incident and calls for those responsible to be not only charged with desecration of the national emblem? Is it treason we’re talking about here?

Was any action taken at the time? I don’t seem to recall it.

Let me get this clear, I’m not blaming the children, they’re too young and impressionable to understand. How were they to know that the rectangle of red white and blue cloth, adorned by the stars of the Southern Cross, was more than just a colourful piece of meaningless material?

How were these young kids to know that this flag flew over the bloodied beaches of Gallipoli, the killing fields of Flanders and the Somme, the hot desert sands of North Africa, the jungles of Papua-New Guinea and of Vietnam, and latterly the hostile hills of Afghanistan?

How were these indigenous kids to know or appreciate the sacrifices made by the heroic youth of previous and current generations?

How were they to understand that at the height of some of the fiercest fighting in wartime, young Australians, lying mortally wounded among the gore and guts of mass slaughter, clutched this humble token of their home country to their bosom and prayed to see the rich brown land of their birth once again?

Maybe they haven’t been told by their parents and guardians or taught by their teachers that the generations of Australians who now jointly inhabit this land with all our multicultural neighbours, bear no responsibility for the perceived sins of our founding fathers.

As I said, I’m not blaming them. But I wonder if, as they grow older and become more aware of the beauty and natural gifts this nation affords all its citizens, will they come to regret their actions?

Will they look back and shudder at the news footage of them grimly and deliberately committing an atrocious act of burning a national flag?

I get angry enough seeing other warring ethnic groups burning each others’ flags in Martin Place or Federation Square.

And please don’t call me a closet royalist, a denier of the Stolen Generation or, worst, a racist against my own indigenous brothers.

I will admit that with a name like my mine,  I can’t hide nor do I want to, my proud  Irish heritage.  There have been times when I have, in the days of my feckless youth, railed against the Union Jack in the corner of the Aussie flag.

But I’m much older now, and I have seen, all those years ago now, some of my mates go off to fight in Vietnam and see the pride they showed in the tiny square of cloth they bore on their uniformed arms and the proudly flapping flag under which they mustered each day at dawn.

And if I am of Irish heritage, nothing diminishes the fervour and love I bear for this country of my birth and the birth of my family.

I feel I’m much more Australian than I ever was after working many years overseas and returning some decades ago to revel in the sun and surf lifestyle for which we are famous.

As a veteran surf lifesaver, nothing gives me greater pleasure than seeing underprivileged kids from outlying communities get to come to the beach and enjoy the delights the sand and surf have to offer.

That’s why I cannot understand why some of my countrymen feel it is right to watch their children burn the Australian flag. To me, it was one of the saddest days in the recent history of our nation.

I used to think the future of this country was in safe hands. Now I’m not so sure.