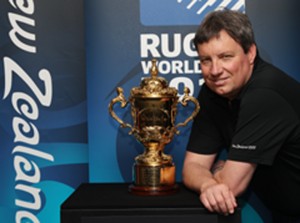 What can fans expect from the hosting of the world’s third biggest sporting event in a small country like New Zealand?

We all remember how well Australia hosted the Rugby World Cup in 2003 though most Kiwis prefer to forget that Stirling Mortlock intercept which ruined the party for the All Blacks!

It was simply brilliant how the Australian Rugby Union managed to take the Tournament into almost unchartered rugby territories like Townsville and Adelaide and elsewhere, and how the locals responded so enthusiastically.

We have certainly learned from all of that. Our promise is that Rugby World Cup 2011 (RWC 2011) in New Zealand will be a fantastic experience for fans from around the world as the Tournament’s coming to a country where we are mad about Rugby, it’s our national game and the fact that the first Tournament was held here 23 years ago (and in Australia too).

When we won the bid in 2005 we promised that RWC 2011 would be delivered by a “stadium of four million” Kiwis. True to that promise 13 match venues, from Whangarei in the far north, to Invercargill in the far south, will host RWC 2011 matches. Those centres, plus another 10, will take turns hosting the 20 teams during the pool match phase. Each of those 23 communities is gearing up to give those teams and their supporters a wonderful welcome.

New Zealanders realise that, in the eyes of the rugby world, the success of RWC 2011 will depend not on how the All Blacks perform, but on how well we look after the other 19 teams and their supporters. We don’t have the rich history of Paris or the sophistication of Sydney, but we will deliver something special, based on the raw beauty of our country, the passion we have for the game and the warmth of our welcome. We will become a “stadium of four million hosts”.

So while we may yell loudly for the All Blacks, rest assured no matter which team you follow to our country, we will be great hosts, we will look after you.

What special events is New Zealand planning around the Tournament?

RWC 2011 won’t just be about rugby. We have a saying – this is a great chance to “take the long way around New Zealand”. For the first time at a RWC there will be a nationwide festival which will run for the full duration of the Tournament. Every region is creating a festival of fantastic events to encourage visitors to embrace our country. It’s called the REAL New Zealand Festival because that is exactly what it is – a celebration of New Zealand that Kiwis are most proud of. We will be showcasing our great art, food and wine, heritage, culture, entertainment and a whole lot more to give you plenty of reasons to travel around New Zealand between matches.

For example, our famous World of Wearable Art show in Wellington which attracts artists and designers from around the world is shifting its dates to coincide with the opening of the Tournament. There’s also a tasty reason to visit our beautiful province of Southland. The local delicacy, the Bluff Oyster is harvested from March to June. However, a portion of the main season quota will be harvested and then put into growing tanks ready for RWC 2011 visitors, but you can only feast on them in Southland.

So at RWC 2011 you won’t just get a flavour of our passion for rugby; you will get a first hand, authentic experience of our country and our people. Find out more at www.realnzfestival.com

How advanced is planning for RWC 2011 and in particular will all the stadia redevelopments be finished on time?

Right across the country our preparations are on track. In October our Prime Minister officially reopened the redeveloped Eden Park, venue for nine key matches including the Final.

A new 22,000 stand boosts the ground’s RWC capacity to 60,000. Public transport links with trains and buses have also been improved to make it much easier to get in and out of the ground.  Eden Park has a proud sporting history and now with world class facilities, fans are in for a fantastic match day experience.

Six other match venues have also been or are currently being upgraded. Then we have a brand new stadium being built in Dunedin. New Zealand’s first fully roofed rugby venue is on target to be finished before RWC 2011 starts.

Two of the quarter finals, plus five pool matches, are being staged at the redeveloped Stadium Christchurch, remembered by many fans as Lancaster Park. The upgrade, completed in January, includes the new Deans Stand named in honour of that great rugby family. The recent earthquake was devastating for the province, but we are pleased to report that the stadium and RWC 2011 training facilities all came through unscathed and we believe the region will bounce back and focus on celebrating its recovery when the Tournament kicks off next year.

How will New Zealand cope with the huge influx of tourists expected and in particular, will visitors easily find the right accommodation?

During the summer visitor peak in February some 267,000 tourists come to New Zealand so we will cope with the demands of RWC 2011. During the pool phase the 20 teams are spread around New Zealand so there should be no problem finding a bed.

The only time accommodation will be stretched will be during the weekends of the quarters, semis and Final. While during that peak period demand for 3-5 star hotel beds will exceed supply, there are a wide variety of alternative options which will meet overall demand. Motels, bed & breakfasts, private home rentals, campervans, homestays – a whole range of options will be available.

We want to make sure our guests stay long, leave with great memories and feel they have had a wonderful value-for-money experience.

So to help visitors find the right bed to suit their budget Tourism New Zealand has launched an online “one stop shop” on its website dedicated to RWC 2011 accommodation.  Find out more at www.newzealand.com/rugby/accommodation/.

How do fans buy tickets?

We have just wrapped up Phase 2 of ticketing. From the first phase some 20,000 fans in 85 countries have signed up to come to New Zealand next year which is a great start. We will be selling more individual match tickets in the build-up to the Tournament. Tickets are also available through Official Travel and Corporate Hospitality Agents.  Find out more at www.rugbyworldcup.com or, better still, sign up to receive our “ticket alerts” so you can be emailed prompt information about what’s on offer.

RWC 2011 will be a special moment in New Zealand’s history. So join us for a unique celebration of our country and we promise some great rugby too!