SHEDDING A TEAR FOR AN ENDURING EDIFICE! OR HOW LIZZIE THE BLUE-TONGUE SAVED THE DAY!! 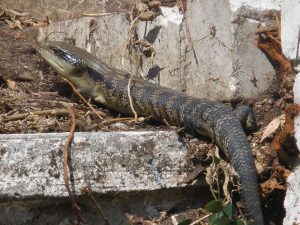 “It’s just got to go…it’s a monstrosity,” she said firmly.

“Monstrosity?” I spluttered.  I was shocked and outraged.

“Monstrosity..my dear woman,” I said, “that is very harsh. This is an edifice of great historical significance.”

“Well you’re the one who wants to get the garden landscaped…you can’t have that vile smelling, rusting, rotting shack right in the middle of it all!”

I was crestfallen. We were talking about the garden shed..my garden shed..where I’d sweated and sworn and plotted and schemed for many a decade. My escape tunnel, my refuge, my chapel of tranquillity, my bastion of balm and beer…..

Admittedly it was no Taj Mahal or Doge’s Palace  but in its way, it had its own grandeur.

She was right of course, about it being a monstrosity, but I’d never dare admit it.

Oh sure, the particular structure we were talking about was certainly old and decrepit and it didn’t exactly compare in historical significance to say, Mawson’s Hut or Uncle Tom’s Cabin.

But dammit, it had a lot of its own history and had provided shelter, comfort and solace to myself and various mates who’d frequented our backyard barbecues over the past twenty years.

It was home not only to an ancient, leaking, malodorous, claptrap of a Victa Commando lawnmower and its accompanying battered,grime-encrusted grass catcher, but it also comfortably housed one of my most treasured possessions… a battered old giant Styrofoam esky which had provided a handy, ice-filled receptacle for holding several dozen containers of amber fluid which are normally consumed on outdoor occasions in most Australian backyards.

It had seen better days but I revered it no less than the fleeing Israelites treasured their golden Ark of the Covenant or King Arthur his mighty Excalibur. And look what happened to them!

No I was determined…no red-blooded Aussie male could stand by and see his trusty garden shed be demolished for the sake of an ornamental pond with a spouting cupid fountain or a sandstone Tuscan terrace overflowing with cascading azaleas or burgeoning bougainvillea.

“Well the landscape bloke’s just going to have to design around it because it’s not going,” I said doggedly.

“I mean that shed’s a part of my life….it’s like a tabernacle, it contains a whole part of a bloke’s spiritual being…I can’t just get rid of it like that.”

“Just look at the roof,” she said. “It’s covered in all that rotting leaf stuff and mud and moss ..it’s a wonder it hasn’t all caved in by now!”

It was true…apart from the rotting organic matter, the roof was almost entirely enshrouded in a thick tangle of impenetrable plumbago foliage, tortuous tendrils of gnarled tea-tree and out-of-control bottlebrush.

The walls weren’t all that flash either and the concrete block on which the whole edifice was perilously poised, was slowly sinking into the moist black sand.

But the benefit of it all was that She Who Shared My Vegie Patch rarely entered into the dank dungeon-like darkness of the shed because of various incidents in the past which involved encounters with backyard wildlife which lurked therein.

Only last week I was setting the table on the deck for the alfresco lunch when I was startled by a horrible shriek.

I spun around just in time to see her recoiling in horror from the canvas director’s chair which I had kindly opened out and placed at the table for her. Admittedly we hadn’t used the chairs all winter and they were looking a bit dirty and sinister.

Following her quivering, pointed finger, I saw a smallish red-back spider scuttling across the seat of madam’s chair.

“Errrrkkkk,” she said shuddering, her hand clasping her mouth.

“It’s only a little red-back….they won’t hurt you unless you sit on them,” I said before realising the error of my remark.

“Exactly,” she said. “I almost DID sit on it…..I’m going inside just in case there are more horrors.”

I mean you can’t win can you?

I wandered back wistfully to the shed and gazed inside its murky depths….I mean it was like a microcosm of a bloke’s life..not only the giant, mice-nibbled esky with its dodgy handle, or the rusting wreck of the Victa Commando with its fuel pump seeping endlessly like the doomed hull of the USS Arizona….

There was also the half-used bags of mulch and chook poo emitting their pungent odours…the acrid vapours emanating from under the bulging lids of countless paint tins and varnish cans….twisted saws and rusted spades, bent garden forks and trowels which had seen better days, rolls of nasty looking wire and prehistoric tools which looked like they had started life in grandpa’s garage.

There was the broken clothesline with its snarled up strings, a monstrous crowbar I borrowed from the next door neighbour about 15 years ago and could no longer lift without risk of permanent dorsal damage….the contorted frame of a whippersnapper which had expired its useful life about a decade ago…nasty looking bottles and screwed-up tubes of hideously toxic chemicals which had no doubt long-ago seeped into the surrounding soil at great threat to the native flora and fauna…

Despite this, it’s almost a sacred site to me..I couldn’t imagine life without it..the garden would be like a nuclear wasteland to me if the thing was demolished…it could barely accommodate two normal sized males standing stubby-hand to stubby-hand, (and a third at a squeeze, provided he was of smallish stature and didn’t mind enduring a certain stuffy intimacy) but it provided a rare blokish comfort.

When you think of it, my shed has even achieved international fame…my wise and understanding brother-in-law Roger who lives in southern England was most impressed by it during his visit to my Down Under paradise and only last week sent me a wonderful book, called Shed Men, for my birthday, knowing what joy this particular tome would bring me.

Judging from flicking through the book, the expression should be An Englishman’s Home is his Shed (not castle as in popular folklore). I mean there are some structures in the book more accurately called summerhouses and with such exotic names as Guzzle Down Lodge.

But I wouldn’t go that far ..we Aussies prefer humbler appellations such as Emoh Ruo…

But after all this, I suddenly remembered I still had a trump card up my sleeve if the conversation about the fate of my Holy Sepulchre with She Who Snaffles My Secateurs re-surfaced.

“Well,” she said, interrupting my reverie, “are you going to get it pulled down?”

“I’m just a bit worried actually… I’m pretty sure I heard Lizzie scuttling around behind it the other day…it’d be a shame to disturb her wouldn’t it”?

“Lizzie” was the doubtful female moniker given to a rather large blue-tongue lizard which had taken up residence in the backyard and has only just awakened from “her” winter hibernation.

“Oh, is Lizzie back there behind the shed again is she? Well, I don’t suppose we need to get rid of it just yet then…”

I smiled an inward smile….”Thanks Lizzie,” I said under my breath, “I’ll make sure I leave out some  extra snails for you!

WHY COL’S MUSIC IS STILL SUCH A JOYE!!