The first ladies golf club at Westward Ho, Adelaide was formed in 1868. The ladies had their own 9 hole course separated from the men, and their own professional, who was only allowed to teach them. A lady could not show an ankle, and wore full decorative dresses.

On windy days the long skirt could make it difficult to see the ball, so an elastic garter was worn at the waist, which was slipped down to above knee level to stop the skirt from rising in the wind.
Later golfing shirts had nipped in waist, leg of mutton sleeves and boater hats. Shirt and tie was essential in most clubs.

Australian women golfers changed all this in 1931. 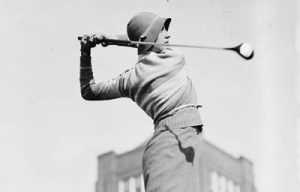 In a competition in Townsville, Queensland some of the players were so hot, they decided to take off their stockings. Utterly disgusted they were disqualified from the competition. No bare legs allowed.

The same year the NSW Ladies Golf Union ruled that Miss Odette Le Febvre, could not play in the state championships in bare legs. Three thousand spectators watched Miss Le Febvre 21 beat Joan Hammond 19 in the final. The Sydney Mail said it was quite impossible, with her shiny brown legs, to tell whether Odette had stockings on or not.

Golf had a condescending attitude to women and fashion in Australia since its inception. Women could not be full members of clubs, only “associate”, yet many were already playing as much as the men.

Something was about to change. Women everywhere could feel it in the wind; they called the wind the 60’s. 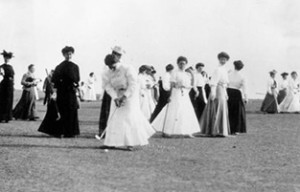 Dianna Thomas and Jan Stephenson shocked the golfing world by wearing the briefest mini-skirts in the late 60’s.

Jan Stephenson was reprimanded by officials of the Ladies Golf Union for wearing psychedelic panties under her tiny skirt. She was omitted by the L.G.U. to play for Australia against Spain, after she wrote an article criticising them. So she turned professional in 1972 going on to prove herself as Australia’s greatest ever woman golfer at this point. She won three big events in 1981, to jump from 34th to 5th in the L.P.G.A. pocketing US $180,528. Voted the best putter by fellow players, Jan courted controversy wherever she went.

In 1982 she was on the front page of every major paper in the world in a scandal where two men were claiming to be her husband. Jan had sought to annul her two-month marriage to Larry Kolb, her manager. He tried to have her committed and then gained a court order to freeze her assets. He claimed the other man Eddie Vossler had used hypnotic techniques on Miss Stephenson, similar to those used by Charles Manson and the Moonies.

A Fort Worth judge ruled than Jan, surrounded by bodyguards, couldn’t be married to Kolb, because under Texas law, she was already the common law wife of Vossler.

Throughout this she led throughout to win the $200.000 U.S.L.P.G.A. championships by 2 strokes. She was the most photographed sportswoman for years, and went on to manipulate the media for super model sums in a very successful post golf career.

Australian women golfers have always been bold individuals, and had to beat a lot of attitude to get where they are today. That’s why we love you.