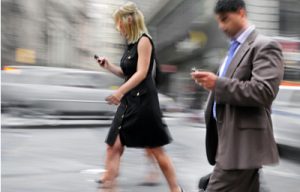 ….when the grandkids are around

I recently took my 4-year-old granddaughter to the dress rehearsal for her dance recital. Instead of enjoying the show, I pulled out my iPhone to record the performance and focused on the screen. But I recorded in slow-mo by mistake; no video! I missed her dancing both real time and digitally.

A few days later whilst walking towards the Vivid Festival I happened upon hundreds of people with smartphones stretched overhead trying to record the show.

Whether it’s capturing an image or checking email or texting, we too often are looking down at our screens instead of looking up at the world around us. That’s the point of “Look Up,” a viral video — 41 million views and counting — by British director Gary Turk. In a simplistic poem, Turk effectively makes the point that when we are “too busy looking down” life can pass us by.

We parents of adult children might think that it’s not important for us to be digitally disconnected when the kids are around. After all, their eyes seem permanently glued to their phones. But adult children do care, found Catherine Steiner-Adair, the author of “The Big Disconnect: Protecting Childhood and Family Relationships in the Digital Age.” In her research, she interviewed 1,000 people including young adults. “Children of all ages — 2, 15, 18, 22 — used the same phrases to talk about how hard it is for them to get their parents’ attention when they need it: sad, angry, mad, frustrated,” she told the New York Times.

Giving someone our full attention means making eye contact. The importance of eye contact for influencing behavior in business situations: looking at a colleague when speaking conveys confidence and respect. Prolonged eye contact during a debate or disagreement can signal you’re standing your ground.

The same holds true when talking to adult children, whether we’re trying to make a point or chatting. Eye contact means we genuinely care about what the other person is saying, not that they come in second to a phone.

The “Look Up” video won’t persuade us to abandon our smartphones. Perhaps though we’ll think twice before pulling it out at dinner or the next recital. Instead, we might just savor the passing moments which, as we know well, go too fast.

To Salsa or Tango?