To Salsa or Tango? 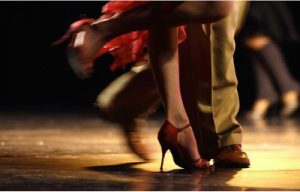 In a dimly lit dance studio, silver-tressed Richard Gere closely embraces sultry Jennifer Lopez while he flawlessly flips and turns her in a passionate tango session. This memorable scene is just an echo of what has become a revolution of sorts in dance studios across the country. Men and women in their 40s, 50s and 60s have put down their squash rackets, golf clubs, terry cloth sweat suits and put on their shiny dancing shoes as social dancing becomes one of the most popular hobbies among this age group.

Television has further fueled the interest in couples dancing in the general public through the reality show “Dancing with the Stars”. This interest has resonated more in the boomer population as fellow celebrity boomers stars light up the stage showing their younger rivals how to boogy. These celebrities were able to show that there’s no age limit when it comes to having fun or learning and refining a new skill.

An obvious advantage to dancing is that it’s an efficient way to get exercise. Most boomers will attest to the fact that it becomes increasingly difficult to shed unwanted pounds as that the need for physical activity becomes even more important in order to maintain strength and fitness. However, for many the prospect of joining a gym is far from appealing. The idea of donning appropriate attire, dragging yourself to the car after a long day at work, then mastering machines or jumping around with some twenty or thirty-something’s in an aerobics class is enough to make the couch seem like heaven. So why don’t you dance instead? A person who weights 150 pounds burns about 77 calories in just 15 minutes of ballroom dancing! That might not sound like very much, but just think the average private dance lesson lasts about 45-50 minutes. Now were talking more than 200 calories.

Latin dancing has become the most popular form of all social dancing. The night club dances like West Coast Swing and Salsa and the more traditional Argentine Tango, Mambo, Samba and the Paso Doble are favorites among the more mature dancers.

Fitness and exercise are not the only advantage of social dancing; many boomers join dance studios with their partners and use this new learning experience as a way to spice up the mundane routine in their lives. For the single boomers, social dancing is a great way to meet new people from different walks of life.

For the boomers who are looking for a breath of fresh air, perhaps a go at the fast paced Paso Doble, or the sensual Tango or even the sizzling Salsa might just be what you need to bring back that youthful energy and lust for life.

If Ian “Dicko” Dickson can tango…..so can you.