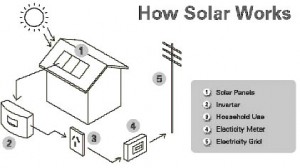 Solar power is pretty amazing. It is usually generated by flat solar panels (1) mounted on a roof. When sunlight falls on the panel it starts producing electricity. No moving parts. No noise. No fuss. Other types of solar panels are now becoming available, and panels can also be installed in many different ways.

Solar panels have been around since the 1950s. It is tried and true technology, and you can expect your solar panels to still be producing power in forty years time.

Solar panels produce direct current (DC). To power most household appliances and to be suitable for export to the electricity grid, the DC electricity needs to be converted to alternating current (AC). This is carried out by the inverter (2). Some inverters make a slight humming noise, and they are usually installed well away from the living areas in the house.

After passing through the inverter, the electricity is available for use in your household (3).

Solar power is a rapidly growing source of energy around the world and many new manufacturers are entering the market. China is fast becoming a leader in solar power and has built up a large manufacturing base. Clear Solar sources solar panels from a number of countries including China, South Korea and the United States. All solar panels and inverters sold in Australia must meet strict quality standards and are certified by independent testing laboratories.

Solar energy is the newest and most cost effective way to satisfy the huge energy needs of human beings. There are many useful applications of the solar energy in day-to-day life, with many advantages over traditional and the conventional sources of energy.
Solar Energy Is Abundant

Solar energy is everywhere, it’s abundant and we’ll practically never run out. Even in mid winter we are blessed with a moderate amount of natural daylight provided courtesy of the sun. Okay, it might not be sunny everyday but we are still experiencing radiation from the sun and it is this which can be gleaned for our own renewable energy purposes. Thus the need for finding a long lasting energy resource is over!

Solar energy is completely free. Sure, there is an initial capital cost but once you have made the investment the energy harvested from the sun costs you nothing. No one will be sending you a bill for sunshine. Thus no worries of spending enormous amounts of your salary in satisfying your energy requirements.

While solar photovoltaic are still relatively expensive, the technology is growing rapidly as is production – and as a result the costs involved are coming down and is now cost effective. Solar hot water panels have been greatly improved in recent years and, with lower cost, payback times for domestic systems can no be as short as five years. As coal, gas and oil prices continue to rise solar energy will become a viable alternative. It’s secure. We live in uncertain times and we are increasingly relying on our fossil fuel supplies coming from areas abroad over which we have little or no control.

Finally solar energy is clean. It is a clean alternative to fossil fuels and nuclear power and it will never run out. It’s silent. Solar power can be captured anywhere without creating noise pollution that might otherwise up set neighbours and wildlife. It works wherever the sun shines. It doesn’t matter how remote, solar can generate energy where no other form of power can be obtained. Thus, no danger of damaging our already damaged environment further and you can be part of the Green initiative, lower your carbon footprint, and save our planet from harmful greenhouse gases.

Depression is More than Biology