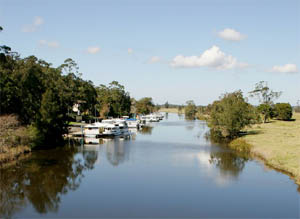 JOHN McNAMEE  RIDES THE CREST OF A WAVE OF WONDERS ON THE NSW MID-NORTH COAST.

I’d been driving for about 20 minutes along the back road from Bulahdelah towards Pacific Palms on the NSW mid-north coast heading for its fabled surfing beaches of Boomerang and Blueys.

It was a beautiful mid-winter morning and I could hear the bellbirds pealing through the forest trees of the Myall Lakes National Park as I drove along with the car windows down.

There was hardly any traffic along the narrow sealed section of the back road and on my left I kept catching glimpses of the lakes stretching away in the distance and flashing incandescently in the morning sunshine with the thickly wooded hills beyond.

What a beautiful time to be driving through the great Aussie bush!

Suddenly up ahead, just as I turned a sharp bend, I saw a long line of cars coming in the opposite direction….they appeared to be slowing to a stop and I thought: “Bloody roadworks” and I eased off on the accelerator.

It was just as well I did. Hurtling directly towards me on my side of the road was a speeding object I first took to be a motorcycle.

I took a deep breath, slowed right down, and tried to move over to the nearside edge of the road but there was a drop of several metres straight into the lake. Behind me I could sense several other vehicles approaching.

I hoped they were slowing down too.

As the demonic vision came closer I realised it was weaving and swerving around alarmingly and I began to brace myself for the impact.

It was a kangaroo!

The terrified creature was obviously panic-stricken when it couldn’t cross the road due to the line of stopped cars so it took off on this frenzied stampede.

I didn’t know whether to blow the horn, flash the headlights, wave my arms around frantically but futilely, or slam on the brakes and wait for the airbags to explode in my face as the frightened animal crashed into my bonnet.

Suddenly at the last moment, with a sidestep that would have made Billy Slater envious, the roo speared off to the right into the bush, missing my car by a metre or so.

As it went by, I had a fleeting image of its wide staring eyes and foam flecked mouth….poor thing, it was out of its wits. That made two of us.

In that brief moment I got the impression it was a young doe, it may even have been her first adventure crossing a road.

Now I’ve done alot of driving bush roads over the years but I can swear I’ve never had a roo coming straight towards me before….normally they belt across in front of you from the side and if they’re lucky, make it to the other side. Too often, sadly, they finish up as roadkill.

Remarkably this wasn’t the only confrontation with rampant nature over the next few days.

Meanwhile, I was still breathing heavily and the heart was still thumping by the time I arrived in the enchanting Pacific Palms village and pulled up in front of the local real estate agents.

As I got stiffly out of the car, I checked the lashings on the beloved eight foot mini-mal strapped snugly on the roofrack of the HRV, and noticed at the end of the tiny shopping centre there was a well-stocked bottlo.

“Bewdy,” I thought. “I might need some strong sustenance later on.”

The idea was to spend a few bachelor days up the coast on a surfing safari while the wife was overseas.

I’d heard so much about the break at Boomerang beach and the swell at Bluey’s that I thought I’d give it a go. No fool like an old fool.

The real estate people I’d been phoning during the previous week quoted me a pay-two-nights-stay for- three special of $400 for a beachside unit at Boomerang. It was ideal, on the top floor of a comfortable well-equipped two-storey townhouse style unit, and from the empty car spaces, it appeared I had the joint to myself.

It was the week before the school holiday started so I thought it was a good deal. It wasn’t until I handed over the card that I was told there would be a $50 booking fee and a $9 credit card charge on top!

I was a bit peeved as I wasn’t previously told about either of these unexpected extras so be warned…if you’re dealing with real estate agents ask them if there is a booking fee involved.

Anyway all that drama was soon forgotten as I unpacked, wrestled myself into the wettie and headed down towards the Boomerang break with my trusty, freshly-waxed-up “stick” snuggled under the armpit.

Down at the south end, against the cliffs, there was a fair-sized swell pumping and alot of the young local blokes were making the most of the spectacularly rolling sets.

I paddled out through the shorey on a pretty gnarly sort of rip when I noticed a shadowy black figure emerge from the water behind me and disappear under an incoming wave.

“Gee that kid’s moving fast in that rip,” was my initial thought as I waited for him to surface. The eyesight’s not too flash when I haven’t got the specs on.

You guessed it, yep, it was a dolphin! And as I sat there riding the swell entranced by this joyous exhibition, another ten or so of its mates all appeared a few metres in front of me, surfing exuberantly through the curling breakers.

It was amazing watching them because you could see their bodies like black spectres flitting across the barrels and you could guess the size of the wave coming towards you giving you those extra few seconds to decide whether it was rideable.

What a magic moment and even though there’s some appalling rips and vicious littoral currents along the shorelines at both Boomy and Blueys, (not for the faint-hearted) the surf lived up to its reputation.

But all these close encounters with nature in the raw were strangely unsettling and besides I didn’t want to press my luck too much in the surf as both Boomy and Blueys have been known to harbour far more sinister dark shapes than the friendly dolphins.

Nasty thoughts like that were far from my mind as I sat on the balcony of my unit the next morning having breakfast after an invigorating early-morning swim in the surf. Suddenly I noticed close into shore, a pod of young humpbacks leisurely making their way across the bay breaching and blowing through the post-dawn mists.

I sat there open-mouthed and thought: “The missus will never believe all this.”

Later as I strolled along the almost deserted beach, I could see a pair of sea eagles gently hovering and soaring majestically around the cliff face occasionally swooping down to pluck an unseen morsel from the water.

The guide books tell you that there are 145 kilometres of coastline and inland waterways along the spectacular Wallis, Smith and Myall lakes networks in the Great Lakes area of northern NSW.

If you don’t fancy the surf beaches there are other more protected areas around nearby Pacific Palms with a surf club patrolled beach during summer at picturesque Elizabeth Bay.

But there are also wonderful inlets and coastal nooks and crannies to be discovered all along this coastal area, and I found the lakeside picnic areas around the Booti Booti National Park breathtaking.

I won’t mention the pair of brazen kookaburras who insisted on sharing my lunch one day at a secluded park rest area!

There’s also a popular campsite mysteriously called The Ruins nestled in the dunes between Seven Mile Beach and Wallis Lake.

There’s not a big shopping centre in Pacific Palms and it can be expensive so if you want serious supplies and at a much cheaper rate, (unleaded petrol was at $1.40 a litre at the local servo!), it’s only a 20-minute drive into Forster-Tuncurry where there’s an enormous supermarket just before you hit town.

But I didn’t spend too much time exploring supermarkets…I hastened back each time to these mystical spots….when the surf’s pumping at Boomy, even we old guys have gotta get into the action!

THE SAD YOUNG HERO WHO ADORNS OUR SURF CLUB WALL