THE DAY THE WALL CAME DOWN…….! 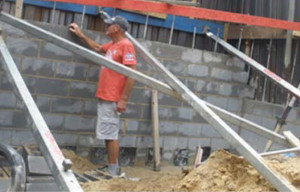 At first we didn’t mind when a few things started appearing in the shed out the back.

We didn’t even mind when we had to leave the back door open so the lads could use the toilet.  After that, life in the sunroom became a living hell.

But we still managed to grin a bit when stuff started to encroach onto the shelves of the beer fridge. The boys had to eat and drink, we told ourselves.

Bottles of Solo, a tub of margarine, half a sandwich loaf, a grubby plastic bag bulging with some foodstuff and various half-eaten wraps or rolls of some sort which we refused to investigate further .

When the two strapping, heavily tattooed lads had arrived to begin the demolition job on the retaining wall, other intrusive items began to appear in the once peaceful surrounds.

After a few days of heavy use, my precious supply of Crown Lagers on the bottom shelf of the back fridge began to be covered with a dusty sheen and were grimy and sandy to the touch. The neck of the bottle felt gritty on my teeth.

The small freezer compartment was soon overrun and stacked with frozen water bottles…the ice inside turned a ghostly ashen colour. Even then we held our nerve as temperatures were often soaring into the top 30s back then and we didn’t want any heat stroke victims collapsing on site.

It was when the toilet seat was being left up after use that chinks began to appear in the gritty reserve of She-Who-Copes-With- All-Crises.

Every time I heard one of the builder’s lads stomp out of the back bathroom, I’d dash in and check that no nasty clues, offensive to the feminine sensibilities, were still in evidence.

But the final straw came when the power tools, bags of cement, massive tool boxes and muddy gumboots started to supplant the normal household impedimenta which have occupied that particular area for decades.

It was even more challenging when strange throbbing instruments with Lithium-Ion labels and other electronic gizmos, were plugged into the double adaptor on the fridge and began emitting red laser beams and issuing high-pitched beeps at unexpected intervals. We even lost the use of the Rinnai hot water heater one day as they had to plug the cement mixer in as their own equipment wasn’t powerful enough, or something.

This whole catastrophe started many months ago when we invited an engineer/site surveyor mate around to assess the safety of our circa 1920s backyard retaining wall which not only had a fair sized shrub growing out of it but had, over the years, began to resemble a long-neglected Tuscan ruin with crumbling aggregate and flimsy stonework adding to the sense of dilapidation.

I rather liked it and many’s the coldie I enjoyed under the scanty shade of this inappropriately growing foliage of a balmy evening as I watched the chumpos and snags sizzle on the barby.

But our mate had other ideas. “The tree’s the only thing holding it up, it’s going to have to go or the wall which is currently keeping back at least 20 cubic metres of sand and soil, not to mention tree roots, could finish up in your backdoor.”

So we bit the bullet and summoned the experts in to draw up a design for the new remedial wall and waited for the bombshell to hit the once tranquil household area.

That’s when our lives changed. We used to enjoy some of those backyard blitz TV shows, but the only “reality” for us after already a month of work, has been a minor nightmare.

Don’t get me wrong…the builders have been tremendous. The demo men courteous and considerate and didn’t mind at all when we begged them not to come around the back at six in the morning to dump or collect their tools but try to leave it until a more civilized hour.

It’s not that the old wall took long to succumb. Just a few hours of the high-pitched screeching of the jack hammers and the power drills soon reduced it, sadly to a pile of rubble.

That’s when the earth removal boys moved in…fair dinkum they shovelled for about five days on end to shift all the sand and soil that collapsed around our back door. They filled three large skips, no kidding. They knocked back my offer of a beer each day but must have gone through about four boxes of tea-bags along the way.

Eventually the hole that appeared where once the noble wall stood would have swallowed a fair-sized suburban school bus. The resulting rubble would have easily choked the fabled Black Hole of Calcutta or at least five outer western Sydney landfill sites.

The boys missed a lot of sand and soil. There’s still about a cubic metre or more on the floor, walls, cabinets and furniture of the back room. The bathroom has turned a strange greyish hue and our towels, when shaken, give off a choking powdery cloud. We haven’t been able to use the vacuum cleaner on the floors as we fear the engine would seize.

Every time we put on our shoes to walk around the house, there’s a strange crunching noise and we leave behind a telltale trail of dusty footprints.

But as I said about the builders, they’re the salt of the earth. No pun intended.  We didn’t mind when they kept dropping hints about cups of tea and “could they plug their kettle into the fridge socket?” The biscuits disappeared within hours of their first appearance on the tea tray and we agonized for days about whether we should have supplied more.

We didn’t even mind when they began borrowing small items out of my meagre tool supply or when the boss builder asked to “borrow” my almost full can of two-stroke lawnmower fuel to get the motor of his fiendishly noisy concrete saw re-started.

“It’ll only need a squirt to get it going,” he assured me. I found the can the other day buried under the rubble. It was almost empty.

We’ve sort of got used to the back room invasion now and we have to keep looking on the positive side as the brickie begins to stack and cement the wall blocks together.

And we’ve sort of got used to the fact that during the construction process, the ancient stone steps leading up into the higher areas of our terraced, former sand duned beachside  property have become detached from the side wall. We can’t go up into the garden area now, it’s too risky.

The other side wall was also looking a bit fragile too so they had to invade the neighbour’s place to install some heavy-timbered props to ensure the whole thing was safe and secure.

Luckily we have understanding neighbours…the distinguished retired gentleman didn’t bat an eyelid when they turned his backyard into a wooden-strutted obstacle course.

And the family on the other side have suffered through their own retaining wall reconstruction nightmare in past years so they are wonderfully sympathetic and don’t seem to mind TOO much when the lads leaned their ladders and stacked their buckets in front of their garage door or carried out spirited conversations at 7am.

Of course those neighbours not directly affected by the state of chaos in our yard, are consumed with curiosity. “Going it a bit posh and building a bloody pool are you mate?.

And: “You’ve discovered gold back there have you mate, digging an oil well maybe, tee hee, tee hee.”

Well I had a retort for that one! “Mate, we’re going to need an oil well to pay for all this!!”

By the time you read this, hopefully the Saga of the Wall will be a distant memory and we would have already had the much-promised barbecue with all our neighbours around to toast our new retaining wall and stone-paved patio area.

I haven’t told them all yet…. We’re renovating the bathroom, sunroom and kitchen next!

WHY I’M LURKING AROUND THE LOCAL LIBRARY AGAIN!