WHY I’M LURKING AROUND THE LOCAL LIBRARY AGAIN! 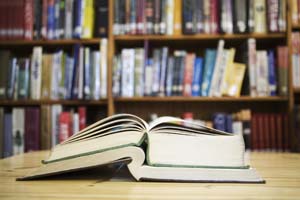 I remember the first time I ever went into a library. As a primary school kid it was like entering the Holy of Holies.

The hushed atmosphere, the stern, bespectacled lady librarian glaring at people from behind the desk.

People tiptoeing around the shelves taking out wondrously-bound volumes and opening their pages with all the reverence and care they’d take unwrapping a precious jewel.

The first books I ever took out reflected my preferred reading of the time…Biggles Flies North, Biggles Flies West and Wind in the Willows.

I devoured them all in a few days and was back again waiting outside the door of the library for it to open.

I come from an old gold mining town but this was my bonanza. Books opened up the world to a country town kid that no formal education could.

I couldn’t get enough of them. Once I’d read and re-read all theBiggles books and there were dozens of them, I thought I’d better nourish my developing brain with loftier stuff.

I graduated to some of the great classics such as Charles Dickens, (I still regard the Pickwick Papers  as one of the funniest books ever written), the soaring adventure tale of Charles Kingsley’s Westward Ho, Thomas Hughes’ Tom Brown’s School Days, then later the Durrell brothers Laurence and Gerald, particularly My Family and other Animals..then wonder of wonders, the sweeping Nelsonic naval tales of C.S.Forester’s Hornblower.

What a world I was living in during those long hot summers where, during a particulalry heavy session of trigonometry or algebra, I would often drift off to the quarterdeck of one of Hornblower’s  fearless fighting frigates taking on the might of Napoleon’s ships of the line.

In  later years at school as I was studying the history of ancient Rome, I’d supplement my formal learning with some fairly vivid historical novels and biographies such as Suetonius’ gritty tome on the Emperor Caligua. Pretty soon, and unbeknown to my parents I had a good working knowledge of imperial debauchery, concubines and bawdy bacchanals with busty Nubian slave girls.

In my final years at school the principal once asked me what sort of book I would like as part of the end of year Honours Awards and I rather shocked him by saying I’d like Hilaire Belloc’s Pathway to Rome. Thinking I must have been interested in travel, I received instead a book on the Red Centre of Australia.

This set me off on another path….as well as the ancient civilizations of Rome and Greece, most of our history at school was based on the Industrial Revolution in Europe, the Reformation, the Tudor and Georgian dynasties and barely little on our own country.

I knew all about the gold rush era, the Eureka Stockade, the miners’ revolts etc because of our family background in the areas but we didn’t get much about Captain Cook and Governor Philip King and the founding of the colony particularly the often brutal suppression of the indigenous population.

So it was back to the library books and the tales of the Rum Rebellion, Governor Macquarie’s founding of the merino sheep industry in NSW, and the transportation of convicts.

To this day I still shudder when I  think of the thrill I experienced as a young lad delving into Marcus Clarke’s For The Term Of His Natural Life and the horror of cannibalism. Then there were the fascinating bushranger epics such as Rolf Boldrewood’s Robbery Under Arms and the dashing Captain Starlight.

What great epics they were. What a great foundation they provided. I don’t resent any of the time I spent reading, even though I took decades for me to catch up on my own country’s rich heritage.

I was reminded of this the other day when I was talking to a young teacher who was in charge of the school’s English curriculum. “I’d love to have your job, “ I told her, “just so I could introduce the kids to some of the great Australian authors alone. What books will you they be studying?”

“Well first off I want to introduce them to The Vampire Slayer and then Dracula,” she told me airily.

Well I gulped in disbelief and slunk away. Sure, Dracula’s a literary epic in its way but why the fascination with bloodsucking vampires and their nemesis as a literary education for our young kids?

Don’t even bother trying to answer that question.

The whole issue was brought into sharper focus when I read a piece in a daily newspaper in which the columnist described how she’d tried to donate some of her old books to a local bookshop.

They virtually threw her out the door saying it was the last thing they wanted…more books!!! They had too many anyway languishing on the shelves because no-one was reading books anymore. They were too busy Googling and using their kindles and i-pads to further their “instant education.’

I’ve actually stepped up my campaign to make sure all the kids in our extended family get suitably appropriate books given to them on their birthdays and Christmas. It’s a joy to behold them opening up their presents and watching them discover the delights of reading the written word and in the younger ones, seeing how they link the text with the colourful images on the page.

Sometimes I’ve actually seen the kids throw aside their pulsating and strobing e-toys and their violent video games and become absorbed in a simple story book.

I know I’ve left it all too late and the young of today will never travel along the road of literary discovery that most of us born in the 50s and 60s experienced.

I must confess it’s been years since I’ve been in a library but the wife joined one the other day and said that to her delight they haven’t changed much over the years. Oh sure, it’s all high-tech borrowing and card scanning and looking up titles on the computer but the basics are still there and it’s still free to join.

And apparently you can actually borrow up to 15 books at a time.

I might just go in and sign up myself….after all these years,  I still haven’t been able to find Biggles Flies East and Biggles Hits the Trail!

GOVERNMENT SET TO SWOOP ON SUPER

THE DAY THE WALL CAME DOWN…….!