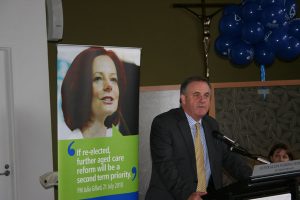 JACK’s emaciated, wrinkled arm was lying outside the bedclothes. He appeared to be asleep.

I walked over quietly and held his hand in mine…it felt clammy and waxen.

I gave it a squeeze and his eyes fluttered open.

“Gidday mate, thought it must be you,” he said with an effort and started to prop himself up on his pillows.

“Take it easy mate,” I said jokingly, “you don’t want to give yourself a hernia!”

He gave a throaty cackle and squeezed my hand.

I could hear the stifled groans and shuffling of the other nursing home residents in the nearby beds. Ceiling fans stirred the tepid air in the ward faintly diffusing the stale body and urine odours.

I looked down at Jack’s frail body. He was a shadow of the man I used to call my “surrogate grandfather” when we first became pals about ten years previously.

He was now well into his 80s but it was evident he was fading fast.

In a way I hoped he wouldn’t have to hang around too long in this place.

After his beloved wife died a few years previously and he started to get lonely in the old home on his own, I’d call in a couple of times a week and take him down to Bondi beach where we used to body surf for hours.

Jack was a Life member of the surf club having done his Bronze medallion back in the 1920s and he always loved swimming in the ocean in front of the club. We scattered his ashes there and to this day I still feel close to him each time I’m at Bondi.

I still have his Bronze medallion in its original cushioned box…I’ve put mine next to his although mine came obviously many decades later.

After we’d cracked a few waves we’d go up to the old Astra Hotel and have a counter lunch and a few beers and talk about how good we were in the surf. I smiled at the memories and looked down at the frail figure on the bed.

“Never better… although the back’s playing up a bit,” he replied, although I could see he was in constant pain.

Behind me I heard the regular nurse come into the ward carrying one of those trays with syringes and ampoules on it, partly covered by a white cloth.

Jack smiled and looked up at her affectionately: “Here’s Clare, my guardian angel,” he rasped. “Though with those needles she’s got a real sting in her tail!”

Clare was a middle-aged lady, a no-nonsense type, a veteran nurse, with a compassionate heart that showed when she spoke to these poor old souls eking out their final days.

“Time for your medication Jack,” said Clare, swiftly swabbing his pathetically thin arm and jabbing the needle in and out.

His eyes began to flutter again and Clare drew me aside. “He’ll be asleep in a few minutes.”

“How’s he been” I asked Clare.

“Tell me about it,” I laughed.””If you could have seen him just a few years ago surging down the face of some of those breakers at Bondi, you’d have been amazed.” Clare laughed and patted Jack’s arm.

“I can see he was a fine stamp of a man,” she said wistfully.

I think often of Jack’s last days in that nursing home with the devoted Clare doing her best to make his stay there as comfortable as possible.

How many like her, I wondered, in nursing and aged care facilities throughout the country, with their selfless dedication and never-ending patience.

She came to mind recently when I received a press release telling me that aged care nurses are often paid about $300 less a week than their mainstream colleagues.

Was that fair, I kept asking myself?

Thanks to the National Seniors Australia (NSA) organisation the fight to correct this unfortunate imbalance continues.

Just recently, NSA chief executive Michael O’Neill said that older Australians have for a long time been backing union calls for pay parity in the aged care sector, saying that, without it, system reform would be impossible.

The calls follow the Productivity Commission’s draft report into aged care (see earlier report in this edition), the first step towards much waited reform, which offers up bonds and reverse mortgages as funding solutions but says little about the sector’s underpaid and overstretched workforce.

Addressing an Australian Nursing Federation rally at a Melbourne nursing home Mr O’Neill, said staffing issues must lie at the heart of reform.

“Ultimately it’s the nurses who, through their everyday one-on-one interactions with nursing home residents, determine how our most vulnerable older Australians – our mums and dads, grandmas and grandpas – live out their final years,” he said.

Yet, attracting and retaining staff is one of the biggest challenges facing the sector.

“It’s unacceptable that nurses working in aged care are paid $300 a week less than their colleagues in the health sector.

“It’s unacceptable that in the past five years, the ratio of more qualified to less qualified staff has dropped, and that the ratio of residents to staff is steadily increasing.

“And it’s unacceptable that in the next 10 years nursing home staff numbers will increase by only around 14 percent yet demand will jump by almost 60 percent,” said Mr O’Neill.

“Unless we address the wages and conditions of aged care workers, reform will be impossible because, ultimately, aged care is about real people, real lives and ageing with dignity,” said Mr O’Neill.

Research conducted for National Seniors by Access Economics in 2010 on aged care concluded the system is currently understaffed, overstretched and unsustainable over the longer term.

This made me think of whatever happened to people like Clare, who deserve to work with the dignity of a decent wage as they allow their ageing patients their own final dignity.

Not long after Jack passed away, I went back to the nursing home to thank Clare for all she had done for my old mate in his final hours.

“Thanks Clare, I knew the old bugger thought a lot of you.”

“Actually, ‘ she said, “ I’m sorry but my name isn’t Clare, it’s Margaret..but I never had the heart to tell Jack that and I often wondered if there had been someone in his life called Clare.”

I took her hand and said: “Yes there was, Clare was his wife’s name.’