The legendary singer gives the scoop on his latest duet-packed album with Natalie Cole, Mavis Staples, Bobby Womack and more

Van Morrison admits he misses the good old days. So it’s no shock that the Celtic crooner’s latest album takes a musical stroll down memory lane. For Duets: Re-working the Catalogue, Morrison enlisted friends old and new to record fresh versions of some overlooked gems from among the 360 songs he’s recorded over his half-century career.

“Some Peace of Mind,” for example, from 1991’s Hymns to the Silence, finds Morrison moaning gloriously alongside R&B great Bobby Womack, who passed away last year. (“I’m lucky I caught him in time,” Morrison says.) The Belfast, Northern Ireland-born singer also brings his 1970 track “If I Ever Needed Someone” back to church with gospel legend Mavis Staples. And Dire Straits guitarist Mark Knopfler helps Morrison take the country-Celtic pulse of 1983’s “Irish Heartbeat.” 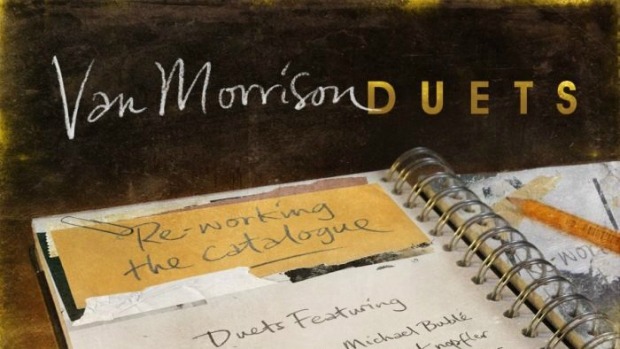 The idea for this “side project” of an album, Morrison says, “has been around for years.” In late 2013, he approached Womack, Staples and Natalie Cole, who, like Morrison, were performing at BluesFest London in the Royal Albert Hall. The first recording sessions went down in London, and later sessions took place back home in Belfast. Was it important to have his duet partners with him in the studio as opposed to recording their parts abroad? “Absolutely!” Morrison affirms. Steve Winwood’s “Fire in the Belly,” from 1997’s The Healing Game, was a rare exception to this mandate.

The spirit of Nat King Cole hovers over “The Eternal Kansas City,” where jubilant soul-jazz singer Gregory Porter, whose vocal resemblance to the late crooner has often been noted, joins Morrison. The connection homes in even closer to the source during “These Are the Days,” from 1989’s Avalon Sunset, in which daughter Natalie’s flamboyant pipes entwine with Morrison’s. “She picked that song,” Morrison says, adding that he has really only come to appreciate Nat King Cole’s genius in jazz — as opposed to “the schmaltzy stuff” — fairly recently.

While he obviously relishes the sheer fun of collaborating with the likes of Taj Mahal (“How Can a Poor Boy?”) and Michael Bublé (whose big band he joins on “Real Real Gone”), Morrison also sees Duets as an opportunity to reintroduce lesser-known songs from his long career and showcase their potential for other singers and commercial uses.

For Morrison, the “good old days” were back when John Lee Hooker defined the blues, Sam Cooke embodied soul and Lead Belly ruled the folk world. And Morrison, 69, has shared the recording studio with Hooker, Tom Jones, Ray Charles and other luminaries on past albums. “I guess I’m coming from a different era,” he admits. Maybe so. But that doesn’t stop him from collaborating with next-generation stars like Porter, Clare Teal (“Carrying a Torch”) and daughter Shana Morrison (the spiritually rousing “Rough God Goes Riding”).

With several decades’ experience behind him, Morrison likes to work fast in the studio. “I’m from the John Lee Hooker school,” he explains. “You get in and you get out.” Fortunately, Morrison found his duet partners up to the challenge. “They pick up what the song is and they just go,” he says approvingly. “There’s no pondering.”

Richard Gehr is a Brooklyn-based music journalist who also writes for Rolling Stone, Spin and the Village Voice.