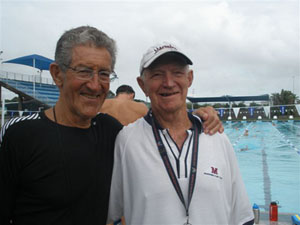 JOHN McNAMEE TALKS TO A LEGEND OF THE SURF AND POOL

THE finely-chiselled bodies of the elite swimmers carve their way smoothly up and down the lanes in the outdoor 50m Olympic pool.

A group of cheerful senior swimmers, there for their morning lap training, watch in awe. “Look at those wonderful physiques, Monica, maybe if our bodies looked like that we could swim fast too,” giggles one rather full-figured lady.

As the young squad do their seemingly endless routines, lap after lap, tumble turning effortlessly, twisting their lithe bodies like dolphins as they swing from freestyle to backstroke mid-lane, there is no mistaking the gravelly Aussie-accented voice of the veteran coach as he paces up and down poolside glaring at his time charts and barking at the sluggards.

As he strides along the pool deck, he’s shouting a litany of apparently meaningless times and instructions comprehensible only to the surging stream of swimmers who glance up and nod at the end of each set.

A pretty familiar scene you would think, replicated at swimming pools across Australia every morning as the champions of the future hone their skills and dream their dreams….

But hang on, those young swimmers don’t have Aussie accents! In fact, there’s a definite North American twang about them.

Some of them even have the distinctive Olympic rings tattooed on their torsos but they faces aren’t familiar .

“Hey JayAr, you wannus to do those 50 frees again?” drawls one muscled young bloke with shoulders like a racehorse and an abdomen as taut as a steel bridge plate.

“Just get in there and do it Chit-Chat,” yells the coach as the squad revels in the early morning freshness of a summer morning at the famous Des Renford Aquatic Centre in Sydney’s south-eastern suburbs.

There’s no doubting who the coach is. All the old pool regulars are greeting him like a long lost friend. No wonder, he’s been parading up and down this pool for more than 40 years.  it’s grizzled veteran John “JR” Rodgers, former mentor of many Australian Olympic and Commonwealth Games swimmers and a legend of the Australian surf.

Rodgers, who more commonly answers to his initials JR, or Jaay-Aaar as his squad drawls it out, is now aged 73 but that doesn’t seem to have stopped him any. He’s as fit as ever, still swims three kilometres every day and although now based in Toronto, Canada,l runs 10 kilometres each day even through the snow-piled depths of a Canadian winter.

Fifteen months ago the highly successful Australian coach was approached by Pierre Lafontaine, head honcho for the Canadian national swim team and asked to train the Toronto High-Performance Squad  (part of the national high performance program) as they prepare for this year’s world long-course championships in Shanghai in July-August this year , the 2012 London Olympics and beyond to the 2014 world titles.

It was always going to be a tough ask as Canada’s swimming stocks have faltered over the past decade.

But that monumental task doesn’t deter this home-grown surf champion who learnt all his survival skills in the gnarly, unpredictable surf at nearby Maroubra beach.

“I didn’t hesitate, that’s what I do best, coach swimmers, I’ve been doing it now for more than 40 years, and although the Canadians didn’t at first seem to be as tough mentally as the Australians, I’ve started to drill that toughness into them. After all, I’m a tough, cranky old bastard myself,” Rodgers laughs.

“Canada didn’t do all that well in the swimming in the last Olympics in Beijing, in fact just one medal in the 1500m to Ryan Cochrane, so they’ve asked me to take over this Toronto squad and train these kids up and hopefully turn them into future Olympic champions.”

And there’s some catching up to do…Ryan Cochrane’s bronze in that 1500m race (won by unheralded Tunisian Oussama Mellouli in a shock result over Australia’s dual Olympic champion and world record holder Grant Hackett) was the first Olympic medal for a Canadian swimmer since the 2000 Sydney Games and the first medal for Canada in the 1500m freestyle in 88 years.

Like our own swimming fortunes, Canada needs a new saviour in the pool and Rodgers could well be the answer.

But what are all these Canadians doing taking over the lanes in the Des Renford pool in rather unfashionable surrounds of Heffron Park in down-under Australia?

“Well, I’ve got 11 swimmers here, including Olympic and Commonwealth competitors and with the Canadian winter being so harsh, I’ve brought the squad over here for a few weeks training in the outdoor 50m pool as there’s only indoor pools available over in Toronto and the outdoor ones can only open for five weeks,” Rodgers explains.

Already some of Rodgers’ squad have tasted Olympic competition including the team captain, Tobias Orwell, at 25, the “elder statesman” of the touring squad and a finalist in the 200m backstroke at the Beijing Games.

The “baby” of the team is the entrancing, doe-eyed 15-year-old Victoria Chan, the Canadian 50m, 100m and 200m national women’s freestyle champion who’s hoping to represent her country at the London Games.

I ask her how she gets along with the gruff-voiced, stern-looking grandfather figure who one day might elevate her to the Olympic dais and a never-to-be-forgotten dream.

“I know he says he’s grumpy and cranky but he’s always sweet to me and says he sees me as another daughter,” Victoria laughingly tells Go55s.

Right on cue, Rodgers chimes in and proudly states that he and wife Jennifer’s elder daughter Danielle, who lives in California with her American husband, has just given birth to twins.

“He’s a great coach and really makes us work hard but it’s been good for us. This is the first time I’ve been out of Canada and being able to train like this in this pool has been tremendous,” Victoria says.

Rodgers is no stranger to Olympic glory…he’s been to multiple Games as a coach over the past few decades and started off his career at the ill-fated Munich Games in 1972.

He started off coaching in this very same Sydney venue, then known just as Heffron pool with such Olympic and Commonwealth stalwarts as Max Metzker, Graeme Brewer, Ron McKeon and Moscow Olympic gold medallist Michelle Ford.

Ironically in the light of his recent appointment, at the 1978 Commonwealth Games in Edmonton, Canada, Rodgers had coached 12 of the 24 Australians on the swim team.

Rodgers has brought the Canadians to Sydney (he also introduced them to the delights of the surf at Noosa in Queensland)  for a couple of weeks as the team builds for the World long-course swimming championships in Shanghai in July-August this year.

“This has been great for them, they’re working well as a team and I’m making sure that although I might call them by their nicknames and joke around a bit, when I say ‘go’, they know to “go”,” he says.

And “go” this mob does… Rodgers doesn’t muck about and he puts them through a gruelling 5-6km pool session twice a day plus regular gym sessions.

But he mixes it all up with some good local fun…this day’s they’re all meeting for lunch at a popular restaurant on Bondi Beach and during the evening they’ll be dining in trendy Surry Hills.

As the team finally starts clambering out of the pool after another two hour session, I ask Rodgers about his spectacular surf lifesaving career when he was a young man in the 1950s.

“I guess my fondest memories were competing with my younger brother Barry, he was a great surf swimmer and won numerous State and Australian titles as well.

“Both of us trained under legendary coach Tom Caddy at Clovelly in a squad which included such greats as (SLSA Hall of Famer) Jon Donohue, Brian Mortenson, Terry Buck, the other Rogers boys, (different spelling) Neil and Greg and many others.’’

Rodgers began competing in national and state titles in the surf and belt races from the age of 16, back in the early 50s, and went on to collect a swag of surf lifesaving honours.

As we are talking, we are joined by fellow swim and surf coach, former Australian teammate and Maroubra surf club legend, Patrick Manning who remembers a great surf carnival in 1953 on Bondi beach when the youthful Rodgers won both the junior and senior surf and belt races against some gigantic opposition.

“Oh yeah, but the best part of that day,” Rodgers suddenly recalls,” was that we were awarded our medals by the new Queen Elizabeth and her husband Prince Phillip who were on the post-Coronation tour of the Commonwealth.

“Yep, that was pretty special, and I’ve still got those medals I won on that day,” Rodgers says proudly.

I ask the tireless septuagenarian if using the new high-tech methods of swim coaching these days is a bit of a struggle, given his, ahem, rather advanced age?

“High tech? This is my high tech,” he says and dives into the pockets of his battered old boardies and produces two stop-watches that look as if they may have been doing service in Dawn Fraser’s day and a crumpled piece of foolscap paper with a scrawl of lap instructions on it.

“This is all I need mate, these watches and this bit of paper. High tech? You’ve got to be kidding,” he snorts and walks away to prepare for his daily, three-kilometre swim.

He’s one tough unit this bloke, believe me!

Canada’s swimmers might not have known what first hit them when the rough and tumble former Maroubra surf champion turned up just over a year ago to help coach part of their national team and restore some pride to the country’s swimming stocks.

But you do get the impression when the London Olympics comes along, these young swimmers are definitely going to bust their guts not just for their country, but for their beloved “Jay-Aar” as well!