An Odd Way of Looking at Whisky - Go55s
Skip to content 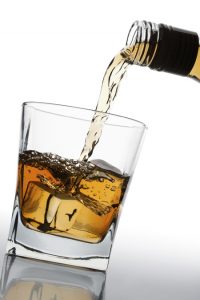 If you’re not satisfied with the way traditional heating methods are keeping you warm this winter, and you’re fond of a tipple, your spirits will be lifted by this season’s range of whiskies, writes Graham Wright.

The editor was adamant, “Wright, keep it short and simple. No waffling. Do you hear me? I know what you’re like, and definitely no flowery language. I don’t want tasting notes sounding like a perfumer’s convention… Oh it smells of a rabbit’s bottom or oh it smells like a black hyacinth that’s only found in Tibet as it gleefully plays across the tongue.”

Here we go: The History of Scottish distilling in one, maybe two sentences.

The Chinese discovered the art of distilling, but in their quest for Mandarin nirvana (as they all wanted to be highly thought of as bureaucrats) they passed the idea off as a bad joke and sold it to the Arabs. The Arabs adored it – what beautiful perfume it created. The European purloined it via the Spanish and found that drinking the perfume gave them a much more relaxing effect than dabbing it on their necks. The Irish perfected it and stupidly (in an economic sense) past it over to the Scots.

The Scots instantly took a shine to it and promptly invaded England. The Poms took offence at the Scots and their vile liquor and swiftly invented soda water to water it down and then even more promptly, invaded the world.

(I think I should have said paragraphs!)

But let’s press on; the fame of Scottish whisky was spread far and wide. Even to Australia, where the fad for imbibing in this most excellent of mixed drinks grew so strong that local distilleries were set up in order to make a direct imitation of this illustrious spirit. Who could ever forget the ‘joys’ of serving a Corio 5 Star whisky, with that catchy slogan, “For that little bit of extra change in your pocket”. Or a Milne’s from Glenelg, or a Hamilton’s. I could, for they were downright horrid.

We wanted the best. And we wanted Scottish.

Sadly, the era of scotch and soda, brandy and dry and that most exquisite of drinks – sherry – soon came to pass. For you see, my generation got totally besotted with wine.

But a curious thing happened. I and many of my drinking buddies across the globe, one day in the early 1980s, put down our glass of Rhine Riesling, and began to take another look at whisky. But this time we weren’t interested in the soft smelling, lightly flavoured blended whiskies that my father drank. No, we were after that rare beast, that building block of blended whisky that most flavoursome and utterly challenging spirit of all: The single malt whisky.

Produced right across Scotland, the single malt was the unruly child that had to be tamed by the great Scottish blenders: Johnnie Walker, Matthew Gloag and his Famous Grouse, Andrew Usher, James Buchanan’s Black & White, William Grant and that enterprising high street off-license, Berry Bros & Rudd (founded 1698) with their Cutty Sark, and the like.

But we were after the wild and exciting. We searched for names like Laphroaig, Bowmore, The Macallan, the illusive Linkwood, Talisker and Highland Park from that far away but very exotic Orkney Islands.

They stung, they gripped and shook us apart, they cajoled and caressed. But they always slipped down a treat.

Who would have thought that pleasure could be derived from a drink that tasted of smoke, iodine, kelp, meat, rubber and burnt matches? Or that happiness could be derived from a spirit that was silky and svelte but tasted of raisiny fruit, kitchen spice and Marveer furniture polish? And that pure joy could be achieved from a beverage that was made up of 62 per cent pure alcohol? We could, but that was a lifetime ago.And guess what? It’s got a whole lot better! Back then, there was only ever a handful of these special spirits available to us that we had to hunt out. But today there’s hundreds.

So what makes these beasts so unique and special? And where exactly, does this unique flavour come from?

We think of distilling as a very simple process: Take a weak beer that’s made from malted barley; gently boil it in a big kettle (alcohol boils at a lower temperature than water) and store it in old oak casks. Simple, you may think. So what’s all the fuss about?What the fuss is all about is the myriad of permutations and combinations that can go on in any one distillery. And it’s these permutations that make each distilleries spirit so different and exciting.

Let’s go an explore them.

Even right at the beginning, when malted barley is fermented into a weak beer, the distiller has the choice to run his ferments hot and fast or cool and slow, to ferment in oak or in stainless steel. This all has an effect on flavour and texture.

Then we get to the stills. Shape, size, capacity, charge (how much you put in it) and how fast or slow you run them also effects the resulting whisky’s character. In a nutshell, the way you run your still determines texture and shape of your spirit and how much copper (a really good cleansing agent) your spirit comes into contact with.

And now we get to another important part: condensing the gaseous spirit in the still back into a liquid state. This is done by a combination of a funnel at the top of the still (called a swan’s neck or more correctly a Lyne Arm), a cooling water bath at the end of the neck (called a condenser) and a device called a Spirits Safe right at the end.

The Spirits Safe is vitally important, because this is where you control how much good clean spirit (called hearts) and nasty, horrible spirit (heads and tails or foreshots and feints) goes into your waiting oak cask. Just remember, that a little bit of nastiness can add a whole lot of personality to a whisky!

By the still’s size, makeup and the way your run your stills including how many times you put your spirit through the still, you can control how fat and oily or light and delicate your spirit is going to be.

And then there’s peat. Would you like your malt smoked sir? Some like lots of smoke think Ardbeg and Laphroaig, others just like the pure taste of malt, think Glengoyne.

And just when you think that there are far too many decisions to be made in the still house, then comes the really interesting decisions. What type of oak shall I use and for how long? American oak, European oak, oak that’s had wine or sherry or other spirits in it, new oak, old oak, big oak (300 litres) or small oak (80 litres). Oak that’s had high toasting, oak that hasn’t. Then ageing: 5 years, 10 years, 18 years, 25 years or 40 years?And oak ageing is super important. Why? Because it’s where 75 per cent of the flavour in your favourite single malt comes from.Notice the way I haven’t mentioned water, barley varieties or location? Important ingredients yes, but they play little in the way of providing flavour.And so to the final product, and the best way for me to finish this little missive on the joys of single malt whisky is by presenting…

The Big G’s guide to 10 most excellent whiskies…

**That won’t break the bank!

The absolute pure taste of malt whisky totally untainted by peat smoke. My benchmark. From Rob Roy country in the Southern Highlands.

Of bonfires and honey pots. The malt that purrs! From Viking Isles of Orkney.

Robust yet elegant, oily yet zesty. Fills every crevice in the mouth. From the banks of the Cromarty Firth Northern Highlands.

Pure and simply brilliant! Liquefied fruitcake. From the heart of Speyside.

When smoke gets in your eyes

Mmmmm…love that pungent scents of the sea, that big whiff of white pepper & the salty tang at the end. A masterpiece. From exotic Isle of Skye.

A big bang for your buck

Totally brutal. No prisoners taken here. Blatantly aggressive, densely smokey and very meaty. And does it work? Wow does it work!! Breathtaking. From the original home of distilling, Campbeltown.

For that very special occasion

Very rich and oh-so very luscious and extremely rare. Go on treat yourself! Right next to Gleneagles in the Highlands.

What can I say…but one of the rarest single malts on earth. Be quick, selling fast! From heart of Speyside.

Please note: Prices are suggested retail prices and may vary.

Graham Wright is director of The Odd Whisky Coy, Australia’s only specialist importer and retailer of fine, rare, hard to find and downright drinkable single malt whiskies. To get in touch with Graham, visit www.theoddwhiskycoy.com.au or call (08) 8365 4722. Source: www.mylifechange.com.au