When life was just a cowboy serial and a chocolate malted…. 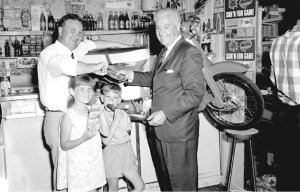 What is it about those golden days of yore that we miss most?

Is it lying in our beds suffering a childhood ailment and waiting for the gruff but kindly old doctor to come in and place his icy cold stethoscope on your bare trembling chest?

Is it having to call everyone who was in any way considered an adult and therefore much wiser in the ways of the world Mister Smith or Missus Brown not “hey you guys”?

Was it as mischievously thieving young lads getting a kick up the backside from the stern but friendly local police constable after being caught climbing over a neighbour’s fence to get at the mulberry tree?

Was it listening to the clink of milk bottles on the doorstep at dawn and knowing you were going to have to get up for school very soon on those chilly winter mornings?

Was it chasing down the street after the old rag and bone man in his swaying ancient cart being pulled by a leg-weary and shaggy-maned draft horse called Dobbin and being allowed to feed him an apple and making sure you didn’t get your fingers caught between his long brown snapping teeth?

Was it clustering around the iceman’s battered old truck every week as he came to make his vital deliveries for the kitchen ice chest?

Was it going to the flicks at the Rialto in the main street on Saturday afternoons, chewing Minties and Fantales and watching the cowboy or Batman and Robin serials?

Maybe it was just having a four digit home telephone number and racing to answer it before your parents just in case it was sweet little Mary-Jane ringing you?

How many of us recall having to “save up” for the luxury items we craved, a new tennis racquet, a new footy or cricket bat?

Were many of us in the Boy Scouts collecting money on Bob-A-Job day or scouring the back streets for bits of lead and copper we could take to the scrapyard and get some pennies to spend on Fanta and chocolate malteds and creamy sodas in the back booth at Molloy’s Milk Bar?

What about the excitement when Olympic pools started being built in our towns and cities after the euphoria of the 1956 Melbourne Olympics and we no longer had to swim in the muddy old leech-infested creeks often among floating bags of dead cats and dogs?

Was it going to the beach every school holidays with a new set of woolen bathers, an old pair of thongs and a makeshift masonite “surfboard” for riding the endless waves of summer? What joy!

Was it enjoying the helter skelter excitement of riding our bikes to school with bits of cardboard pegged to the back wheel to make a motorcycle sound?

Do kids ride their bikes to school these days? Why would they when so many in the more affluent suburbs get chauffeured in the back of monstrous, air conditioned and heated 4WD vehicles?

Just visit any suburban school at afternoon pick-up time and prepare to run the gamut of the Parent Stampede!!

You are going to say there are more predators lurking in the streets these days compared to the carefree days of our youth.

Of course there are and it’s better that our kids are more aware of these dangers than the hush-hush attitudes of the 50s and 60s.

But we digress from our main theme of childhood wonders, mysteries, heartbreaking adolescent love affairs and getting caned on the backside for not knowing the capital of Canada.

Was it the Friday night ritual of fish and chips, hot and oily and wrapped in newspaper and liberally scattered with salt and drowned in White Crow tomato sauce?

Was it sitting around the piano in the lounge room at home on a Sunday night listening to Dad sing his Irish songs while Mum knitted colourful pullovers and we kids tittered and giggled and fidgeted until we got our chance to stand up and try to recite The Man from Snowy River or The Lays of Ancient Rome?

Or listening to the wireless serials such as fearless newspaperman Randy Stone in Nightbeat (“Stories start in many different ways, this one started when a blonde walked into my office…., “) Blue Hills, Dad and Dave and the Colgate-Palmolive Theatre?

Maybe at the weekends driving for hours in the green FJ with the sharp pointy wings on the bonnet to Uncle Joe’s sheep farm straddling the banks of the mighty Murray River and watching the excitedly yapping sheep dogs driving thousands of head of prime merino into the noisome teeming yards beside the shearing shed where greasy-armed men in black singlets plied their glittering electric shears with the dexterity of surgeons?

I guess we were lucky as kids because we had a stable family background and although we pretended not to, we really deep down loved going to school where we could kick and pass the footy around with our mates or dodge the sizzling cover drives on the playground cricket pitches before shuffling into draughty, unheated classrooms trying to unravel the arcane mysteries of trigonometry or algebra but lapping up the lessons on English literature, history, geography , and French.

Occasionally we’d have a school excursion to a nearby place of interest, such as an old mine, or an historic building, or even the local railway workshops or timber mill for those among us who were destined not to pursue an academic career.

These days schoolkids seem to have excursions several times a week and you wonder would they be better off spending more time in the classroom learning the rudiments rather than being dragged around various environmentally precious sites and learning how to protect a green tree frog from habitat loss?

But I started this diatribe with the intention of not being bitter and twisted about how good we had it back then and how lucky the kids of today are, thanks to us.

To tell you the truth I’m in awe of the kids of today and how blithely they cope with the saturating plethora of technology with which their daily lives are governed.

But quite frankly, I still think we had it better back then, don’t you?

I mean where can you get a spearmint-flavoured milkshake and a Hopalong Cassidy silver revolver these days?

Daring To Straddle The Digital Divide