Who’s the mug when the cup runneth over? 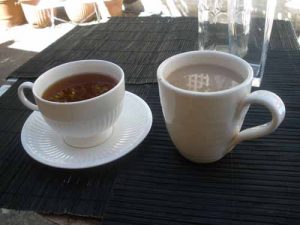 JOHN McNAMEE  FEELS HE’S BEEN DOWNSIZED IN THE COFFEE STAKES

The other day I was sitting in a restaurant having a well-earned morning coffee when a bloke casually strolled walked in and sat down at the next table. I gaped at him. He wasn’t wearing a shirt.

It wasn’t as if he had left his shirt down the beach or in the car….you could almost understand that….but he was actually carrying it in his hand.

He was also barefooted.

I glanced quickly round towards the wait staff expecting them to pounce and point out to this gentleman that he was in fact violating an unspoken dress code and that some people might regard his lack of suitable attire somewhat discomforting.

It wasn’t as if it was a beachside kiosk or al fresco dining area under the street umbrellas…it was slap bang in the middle of a respectable coffee lounge-restaurant frequented by distinguished clientele such as my good self and the missus, respectable family groups and starry-eyed young lovers.

This bloke was accompanied by his girlfriend busily chewing gum and reaching for the menu before she’d hardly managed to sit down..it was obvious she wasn’t exactly a doyen of good sartorial taste either as she was scantily covered in what I think is described as a postage-stamp sized bra-top , a bikini bottom on which a gnat could not have blown its nose, and a gauzy wrap type thing that wafted around her lower limbs. She was also barefooted.

The way young sheilas get around these days with barely nothing covering what my old mum would have described as their poppy-show, I suppose this lady could just have passed muster in the dress code stakes.

Now the shirtless wonder was no multi-tattooed specimen like rugby’s Sonny Bill Williams or league’s Todd Carney or AFL’s Dane Swan so he could not have been put in the category of “undesirable clientele” and banned from the premises  as was recently done by an outraged Sydney restaurateur.

Not to put too fine a point on it but this uncovered cove had a pale, scrawny. hairless physique similar to those you see running around wearing daggy shorts in  parkland areas not too far away from backpacker hostels.

Know what I mean?

Anyway, the shirtless shoeless wonder and his wafty little tablemate were totally oblivious to the stares from the other lunchtime diners who, like ourselves, couldn’t enjoy the precious coffee and muffins with this semi-naked specimen sitting nearby.

I noticed some other people in whispered conversations with senior wait staff but their requests were just met by indifferent shrugs.

We hastily finished our drinks and scurried out casting a nasty glare back at this bloke who by this time was burying his face in a bulging wrap of spurting mayo-drenched undescribable food items.

Going into restaurants these days is no longer accompanied by a feeling of joyous expectation of culinary, social and bibulous delights.

If you’re not careful walking through the entrance you’re just as likely to be ambushed by a barricade of circled baby strollers, abandoned at the doorway by a gaggle of noisy yummy mummies who give the impression they’ve booked out the joint for the whole day and they glare at you with a malice they would normally reserve for a gatecrasher at a family party.

Once again, a friendly request to the wait staff about maybe reducing the perils represented by the circling wagons of strollers meets with another shrug.

It’s become a cult now…up to a dozen or more young mums with totally undisciplined toddlers running rampant throughout the cafe is a common sight right throughout our suburban cafe strips.

What annoys me most of all is that even when I’ve squeezed into the last remaining corner to snare a tiny remnant of a table for my morning cappuccino, these totally self-absorbed females regard you as a perverted intruder intent on listening to their inane chatter.

I know cafe owners have to make a quid these days but gee, they’ve got to look after their regulars too.

I don’t know what’s happening in the restaurant game these days…have you noticed over the past couple of years, wait staff appear to have been instructed to lurk around behind the tables ready to pounce on the empty plate/cup/mug as soon as the last dreg has been consumed.

One young thing almost knocked my specs off the other day so eager was she to reach across from behind my head and snatch at the coffee mug I’d only just emptied.

I just managed to get it on the table, in its saucer when whooska! out shot an arm, the specs were knocked around my ears and the mug was gone before I could recover from the shock.

The same thing’s happening everywhere..they don’t want the coffee-only clientele who enjoy the experience of a mid-morning get-together with a mate or loved one…they want you outta there and they train these robot-type wait people with reflexes like rattlesnakes to prowl around your table like a pack of hyenas around a just-felled warthog.

But what really gets on my goat is the cup-replacing-mug scam that seems to be infecting the coffee shop world these days.

I’m certainly not alone in this either…when we go into a cafe to order a mug of our particular coffee, we obviously want a MUG not a CUP!

Why is it then that a large coffee, in particular, a large cappuccino, seems to come too frequently not in a MUG but a largish cup more suitable to some other more benign beverage such as tea.

Now I’ve got nothing against tea…it’s refreshed me in the mornings for many years and one of my abiding memories is how,  in its cold, bottled form, it sustained me and a mate for several hot, thirsty days in above century heat,  when we were kids having to scythe down the thistles in the 80-acre paddock of my uncle’s farm along the once-majestic and mighty Murray River.

But that’s another story…

The Italians, who know a thing or two about coffee, love throwing it down from small cups in the mornings as they scan the morning newspapers and snarl down their aquiline noses as the hordes of tourists who have invaded their sacred realms..

But they’re very excitable people, they’re always in a rush, whether they’re going somewhere or talking on their mobiles and they need to get that coffee down real fast.

In a cup, however, no matter how big, it gets colder quicker and the consistency of the froth-coffee bean mix is never as consistent…

You see, it’s a conspiracy…THEY want the drink to get colder quicker so they can send their snatching robots over to grab the receptacles from under our chocolate-tipped noses and get us all the hell out of their place!!!

Just as well I’m not neurotic about this!!!!