Why I’m In The Basement When It Comes To Bargain 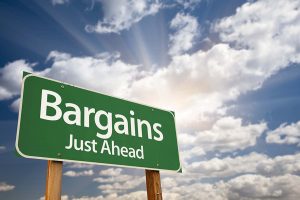 It’s a well-documented legend that in 1626 a crafty Dutchman called Peter Minuit paid the Native Americans the paltry sum of 60 guilders in goods and trinkets for the island of Manhattan.

Today that amount would be roughly equivalent to $US1000.

Now probably that would have been just a bit better than a poke in the eye with a sharp stick for the then traditional owners.

And I suppose the new settlers went on to make a pretty good fist of turning their bargain property into arguably the greatest city on earth.

And to add insult to injury, over the subsequent centuries they did their best to eliminate the entire Native American peoples so they certainly got their 60 guilders worth.

But that’s another story and it does bring to mind the power of the bargain…the hype of the haggle….the bravado of the barter…you get the picture.

If it had been left to me and I was one of the chief negotiators in this Dutchman’s party, I would have finished up offering the poor ignorant vendors the entire wealth of the Amsterdam diamond vaults.

Closer to home, if I’d been in charge of the Mabo Native Title case, not only would the rightful occupants have been given back their traditional lands, I’d have thrown in the Sydney Harbour Bridge, the Opera House, the MCG and the entire Gold Coast beachfront as well.

But that’s just me…I could no sooner beat down someone for a bargain than paddle down the Nile on a balsa wood ironing board.

Normally when I rashly try to engage in a fit of salesperson browbeating, I’m the one who finishes up paying more than the dam thing was worth in the first place.

Recently I was in an antique shop and spotted a pictorial item that sparked my interest. “I have to have that but I’m not paying that bloody ridiculous price for it. They’re got another think coming. Tell ‘em they’re dreamin’,” I said to myself puffing out my chest.

I marched boldly up and fixed the urbane gentleman behind the counter with a steely glare.

“That’s right sir,’ he replied with a sardonic smile. He’d picked me already. He knew I was easy meat. He could probably see the beads of sweat forming on my brow.

“How about I give you forty bucks for it…that’s more than it’s worth anyway.”

There was a pause while he considered this…he looked as if he couldn’t believe what his ears told him.

I detected a doubt in his mind. I felt good, I was empowered. I could handle this dandy anytime. I was feeling confident, maybe TOO confident.

“Sorry sir, it’s $55, as marked.” He started to turn away. The fish was getting off the hook. I had to make my next play. And it had to be a good one.

“OK, OK, “I said, pulling out a fifty from my wallet. “Here’s fifty bucks..we’ll call it quits shall we?”

He looked down at the 50 note as if I handed him a spitting cobra….or a ransom note for the crown jewels.  Maybe he wasn’t used to tough nuts like myself who deal in hard cash on occasions like these.

“Look I’m terribly sorry sir, but I’m not in a position to reduce this item. It’s $55 as I said, now do you want it because I’m rather busy…”

I should have walked out of the dammed shop then. Taken my dignity with me. Marked it off as something to learn from experience. No-one else would have known. No-one else was there to witness my humiliation

But no I didn’t walk out. I stood rooted to the spot. He’d won hands down. He didn’t even have to pull out his big guns. He had me in his crosshairs and I was a sitting duck.

I pulled out a five dollar note and handed over the $55.

Suddenly this ice-cold automaton was all charm and smiles again.

“Thank you very much sir, here’s your receipt..I think youi’ll get a lot of enjoyment out of this item…have a nice day.”

I shrunk out clutching my parcel. It felt like soiled goods in my hands.

This wasn’t the only time. This sort of degradation happens to me all the time. If I were a professional poker player and had to present a stony face when holding a full house or a royal flush or whatever, my opponent would have read me like a book. “I think I’ll fold,” he’d say with a smirk as I dropped the winning cards on the table.

Sometimes I’ve been known to see an item in a shop window and think that would make a good present for She Who No Longer Counts Her Birthdays.

“I see that necklace is marked at $235…that’s pretty good for an expensive piece of jewellery like that, isn’t it,” I’d say to the ravishingly gorgeous shop assistant, and start reaching for my credit cards.

“Oh that one there? Yes it is  beautiful isn’t it. Unfortunately it’s just come off the sale list which finished yesterday and it’s actually $450. Shall I wrap it for you sir?”

Now I’ll never begrudge spending on an expensive gift for the love of my life …. But, you see, how I’ve been trapped again? I can’t retreat or this lovely young lady will think I’m a cheapskate.  I must have a bullseye marked on my forehead, detectable only by shop assistants and other retail spoilsports.

“It’s still quite a bargain isn’t it,” I say , seemingly unconcerned that maybe I’ve been dudded again. “Yes if you could gift wrap it for me, that would be wonderful, “ I say  resignedly.

To make matters worse, as I was travelling home on the bus I heard two women discussing their latest shopping acquisitions.

“Well, it was marked at $40 but when I took it to the check out, it’d been reduced to $15..and then when I checked under the original label, I noticed that it had been originally priced at $75. I couldn’t believe my luck, “ she cried triumphantly.

Now I know from past experiences trailing along behind She Who Has A Bloodhound’s Nose for a Bargain, that this sort of price war goes on all the time in women’s stores.

“Did you find that pair of shorts you said you liked?” she’d ask.

“No I think they’re all gone in my size and besides they were more than I wanted to pay,” I’d reply.

“Nonsense,” she’d retort and she’d promptly dive into a bewildering maze of clothes racks like a beagle into a foxes earth.

“Here you are,” she’d say emerging after a short but frenzied search holding up the right sized garment.

See what I mean?

The Alkaline Diet Strategy That Will Work Wonders For You

Digging Up The Golden Sands Of Time!