Late last year a group of Qantas female flight attendants celebrated with Justice Michael Kirby and their legal team the 20th anniversary of an industrial relations victory against Qantas.

Such is the pull of their story that even some of the opposing lawyers will come along. It’s about the collective will of a bunch of feisty women who took on the “big boys”, won an estimated A$3 million payout, and got their jobs back.

In October the Workforce Gender Equality Agency launched its “daughter water” campaign, targeting the problem of pay inequity in Australia.

This historic battle with Qantas reminds us of how far we’ve come and provides inspiration to fight the good fight. 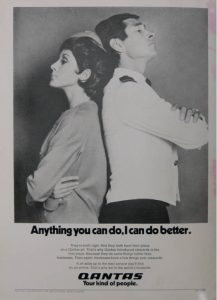 How the case played out

In the early 1980s, a group of flight hostesses, as they were called then, lodged a class action complaint with the Anti-Discrimination Board saying Qantas had discriminated against them in terms of recruitment, promotion and placement as cabin crew. The women won the case but Qantas appealed all the way to the High Court.

Tricia Gubbins, who joined Qantas in 1974 as a flight hostess, had signed a contract to leave at age 35. Many other flight hostesses had signed the same contract but, as that date started to approach, many of the women changed their minds and wanted to stay.

These women had seen men employed in flight steward positions rise through the ranks, and none of them were asked to resign at 35. The women asked if they could have the same opportunity as the men, but Qantas refused. (Domestic airlines, Trans-Australia Airlines and Ansett Australia, didn’t have this conundrum as they didn’t employ men until 1980.)

The case meandered through the courts for ten long years. The women would regularly ring each other up to do a whip around, and get more money to help pay legal costs; a hundred dollars here or fifty dollars there, depending on what they could afford.

Tricia left in 1984, but was reinstated along with some of the other flight attendants in 1986, while others would have to wait another eight years.

Finally, in August 1992, the Qantas appeal was dismissed by Justice Michael Kirby and one other: it was a 2-1 decision (presiding Handley, Gleeson and Kirby). The women were offered reinstatement and despite the delight in victory it had to be acknowledged that their lives had changed significantly in those intervening years.

One of the flight attendants had had two children during the duration of the dispute but the significance of the victory saw her back at work, and she, along with many of the women, went on to fly for a number of years and were promoted to senior positions. 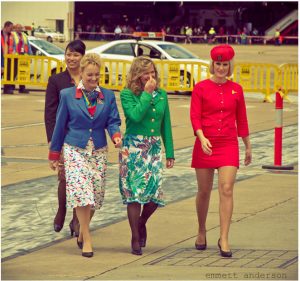 From the 1930s, when flight hostesses first came on-board airlines in Australia, these women created a modern profession, writing their own training manuals and negotiating the terms of their employment in relation to the technological demands of the aircraft they were crewing.

Qantas employed their first hostesses late in 1948 to fly on the new Lockheed Constellation service from Australia to the UK. Within a year the male flight stewards went on a four-day strike. Newspaper headlines across the country read:

The flight stewards took their case to the Conciliation Commission, worried that “they were no longer in the limelight” with their duties pushed to the background, while the flight hostesses took over the glamour side of the job – taking care of the passengers.

The “girls”, as they were called, had come on board with their good looks, charm and youthful determination and were fully aware of the tough demands of the job.

By 1956 the Airline Hostesses’ Association was formed (now the Flight Attendants’ Association of Australia). It was unique as being the only union in Australia with an entirely female membership and it didn’t seem to make much difference that they shared the same industrial officer as the pilots’ union.

These young women also knew they had the power to ground the airline network and hence the nation.

Crew numbers were critical to getting a plane off the ground, and if they didn’t fly no-one else did either. It wasn’t just Qantas flight hostesses who fought for better conditions.

In 1975, the “Old Boilers Dispute” created a win for domestic flight hostesses.

Sir Reginald Ansett had called the domestic union executive a “batch of old boilers” (even though they were aged between 28 and 35) as they supported a two-day strike for better pay, the opportunity to fly until they were three-months pregnant and an increase in the retirement age to 45.

The fact that – 20 years on – there is still reason to celebrate the 1994 landmark victory is testimony to how significant this win was for those women, the legal teams who fought workplace discrimination, and the women who continue to work in the airline industry.

By Prudence Black, ARC DECRA Fellow in Gender and Cultural Studies at University of Sydney. This article was originally published on The Conversation Read the original article here http://theconversation.com/flying-high-the-qantas-battle-for-pay-equity-resonates-20-years-on-32805

Main Picture The ‘girls’, with their good looks, charm and youthful determination, were fully aware of the tough demands of the job. Photo: Qantas