On the road to the grape escape 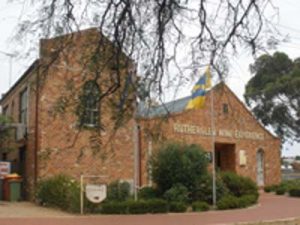 FRANK was just like my old man, a country town-born “bushie” who was only ever happy when he was out among the gum trees yarning over the tailgate of the old Chev ute, the faithful kelpie panting in the shade.

Battered hat on his head, Dad would be sucking on a foul-smelling roll-your-own smoke while Frank would be chewing a gum leaf or flicking the flies away with a twig.

They’d be watching Frank’s prized Herefords being herded into the 80-acre paddock down among the weeping willows along the lethargically-flowing river.

In drought years only the joyful pardelopes and swallows flickered along the dried out mud banks of the once free flowing waterway while puddles of brackish sludge punctuated the pitted riverbed.

There were always plenty of yabbies there and as kids we’d use makeshift stick nets fashioned from mum’s old stockings to dig them out of their clogged-up mudholes.

When the rains eventually came and flushed out the baked riverbeds with strongly flowing torrents, the river would be full of trout, redfin and cod…all too elusive for our primitive fishing gear.

But those years were rare and often Frank’s cattle would exist only on the scratchy pastures and bales of feedlot brought from the nearby silos.

Both the old man and Frank have long passed but the fickle local rivers seem to flow more strongly these days.

The pock-marked landscapes around many of these Victorian country towns saw the birth of the fabulous gold prospecting frenzy of the 1850s but now there is an even richer harvest.

All the memories of those times came flooding back recently as I was browsing through the cornucopian shelves of a boutique winery and came across a tantalizingly titled shiraz called Frank’s Paddock. It was too good to resist and from the first taste of its robust flavours, I was transported back to the halcyon days of youth.

We just happened to make the nostalgic discovery while touring the northern Victorian wine country and meandering around the vineyards of the Milawa, Rutherglen and King Valley regions. The area lies between the lower Ovens and King rivers and is enroute to the snowfields.

I was lured to this enchanting countryside by one of my nephews who was getting married down there and he knew there was a surefire way to get his Sydney-slicker, surf-soaked, long-board riding old uncle to attend…hold the ceremony in a winery!

And what a wonderful adventure it all turned out to be.

I’d first visited the historic and quaint township of Rutherglen and written a travel piece for the then Walkabout magazine on the area’s nascent wine growing endeavours back in the mid-60s. Wine still quite unjustly had an unfortunate “plonk”  reputation among the uninitiated as the bush pubs were bastions of beer-drinking bravado.

The actual article and sadly, the magazine have long vanished in the mists of time but I can distinctly remember  driving up to one of the original wineries, housed in a corrugated iron-roofed tin shed with rusting farmyard implements lying abandoned under the trees and flocks of crows wheeling and cawing mawkishly over the straggling lines of grapevines.

It was blisteringly hot and when the friendly, heavily bearded winemaker welcomed me into his ramshackle domain, it was like entering a blast furnace redolent with oppressive sugary vapours.

Sweating profusely, I accepted a dusty old glass he had just wiped on his tattered apron and from which he had just emptied some cobwebs and their accompanying panicked arachnids.

It was truly ambrosial fluid and after another glass or three of this nectar in the blazing bush heat, I was forced to sleep it off in the car for the next couple of hours.

I was reminded of this tin shed as I turned into the driveway of the historic Jones winery and vineyard just a few kilometers outside Rutherglen.

Established in 1860, Jones’ is one of the oldest in the area and the original family traditions are still upheld by winemaker Arthur Jones and his sister Mandy.

The heritage listed building is built from homemade bricks and still has its original bark-lined roof. But it’s a far cry from the type of primitive tin shed operation I’d visited all those years ago.

Inside the charming, heavily-timbered and polished wood reception and tasting area, is a fully-equipped restaurant serving fine French cuisine. Its noted wines include a popular “JW dry red” shiraz and marsanne as well as fortifieds such as Apero and Jones’ “Classic Muscat.”

Sadly we couldn’t stop to sample all its delights as we had a wedding to attend in the rosegarden area near Milawa Mustards, a comfortable drive away and easy to get to from Albury airport where we first arrived in the region.

You need a week just to get around all the food delights let alone the wineries.

True to his word, loyal nephew Luke and his lovely bride Lauren then made sure we sampled the heady nectars of the Sam Miranda winery in nearby Oxley where the lavish reception was held.

Sam Miranda is one of the flagships of the King Valley region offering many of the usual red and white wines but particularly the  exotic Mediterranean varieties such as Saperavi, Tempranillo and our favourite wedding toast tipple, the heady, scintillating Sangiovese.

Getting back to our original discovery, the Frank’s Paddock, this also comes from a famous King Valley winery with an Italian connection…Politini’s in Cheshunt, founded back in the 1950s by Salvatore (Sam) Politini and his brother Paolo who had emigrated from Sicily and settled in the area.

We were there at the wrong time but Politini’s La Dolce Vita festival in the third weekend of November each year has been described to us as a truly Sicilian bacchanale of delicious foods and wines!

The day after the wedding, a visit and free guided tour of the so-called “headquarters” of the local wine region, Brown Brothers could not be missed.

Here the hushed surrounds of the vaulted ceilinged, walnut-lined tasting room originally constructed as a barn in 1857, is like a cathedral to the vigneron’s religion.

Their trademark flavours range from Spanish, Italian and Australian varieties.

Brown Brothers, just off the main Milawa road, is still family owned and you can enjoy a barbecue under the giant trees which add a jolly picnic atmosphere to the day.

But it was time to head back to our cosy little Milawa Lodge motel where mine hosts ensured that we were able to sleep soundly in their perfectly furnished and appointed rooms before next morning’s freshly cooked full breakfast in their Cooper’s restaurant/ dining room that would do credit to an international hotel.

As we’d flown down to Albury in a small Qantaslink plane, we couldn’t lug back any more than a few bottles wrapped in tea towels and tucked among the t-shirts in our luggage but they all arrived safely.

And I can assure you, the Frank’s Paddock shiraz tasted even better.

Picture: The Rutherglen Visitors Centre is the first stop for anyone wanting to tour the local wine regions.

GOVERNMENT SET TO SWOOP ON SUPER