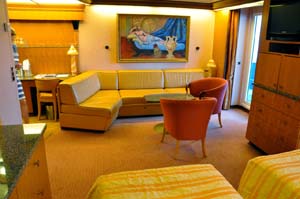 RETIRE ON A CRUISE SHIP

If you are one of the many seniors that has discovered the joys of cruising and look forward to your next holiday on a cruise ship, then here is an idea that you may find of interest.

Have you ever thought how much you would love to retire on a cruise ship?

Well it’s not as silly as it sounds.  Do you know that according to a recent study that it costs no more to continually cruise, than to pay for a high end nursing or retirement home.

When we reach retirement age, that’s me, it’s a huge decision – whether to downsize from the family home, move to an apartment or unit or head for a retirement complex.

My wife, also retired, and I love cruising, so would it be practical to sell up, divide how long we think we have left and see if our hard earned savings (prudently invested) could support us on a cruise ship for our years to come.

I believe it is possible to do a financial deal long term with the shipping company for permanent accommodation to live on a ship.  Imagine living in a cabin, with a bedroom, lounge – study as well as a small balcony. Your cabin is serviced several times a day and offers 24 hour room service, plus no washing sheets and towels, no dusting, no housework at all, sounds almost too good to be true.  Though it would be small, there are plenty of lounge and outdoor deck areas on a ship to relax, as well as a library full of books, a computer room and a gymnasium and swimming pools. A spa with a beautician and hairdresser plus all the deluxe features that one would only expect in a 5 star hotel.

Imagine enjoying entertainment every night, with 3 to 5 quality meals a day.  Imagine attentive caring crew to look after your every need, that treat you like royalty.  Perhaps all this sounds too good to be true – well it’s called Cruising and it is affordable.

BUT – there is a catch and that’s called medical care.

Ships have excellent medical facilities and offer at least one or two doctors and several nurses, nevertheless this can be expensive and the older one gets the harder it is to purchase travel insurance.

If retirees limited themselves to cruises in Australian waters, they would never be more than one or two days away from local doctors, where coverage by Medicare and local health insurance would kick in.  Its an in interesting thought, perhaps we should look into it.

Here’s an idea lets turn older cruise ships into retirement villiages. Find a satisfactory spot to moor them close to big city medical facilities.  The ship would qualify for all medical benefits as she would be permanently tied up at an Australian location. Operate the ship as though she was a cruise ship – not a nursing home.

Change some of our unrealistic workplace laws to allow crew (carers) to receive similar pay to what they would be paid if working at sea.  There are thousands of highly trained nurses in the Philippines who would jump at the opportunity to do this work.

As our population grows older, we have to think outside the box.

You would be treated as a passenger, not a patient.

This idea has so much to offer and would not only appeal to the regular demographic of retirees but would attract the younger 55+ retiree groups as well.

In my many cruises I have run into several older passengers that virtually live on a cruise ship.

My wife and I were cruising on a Crystal Line ship where we became friendly with a woman in her eighties.  The lady had a vibrant personality, full of vim and vigour.  She asked us if this was our first cruise on Crystal, to which we replied “yes”.  I asked her how many cruises on Crystal she had done, to which she replied “This is my 130th cruise”.  I must admit I was surprised.  I said “you must virtually live on the ship” to which she replied “yes I do, it beats living in a retirement home”.

This is when I first realized that retiring on a cruise ship may not only be practical, but made a lot of sense, not only financially but in quality of life.

On the road to the grape escape