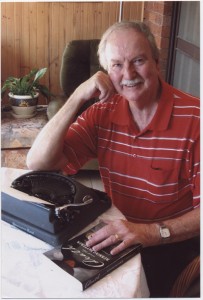 … THE LEGENDS, MYTHS AND MYSTERIES OF A HARD-NOSED COP AND AN EXILED EMPEROR

IMAGINE it: the squalid rum-sodden streets of inner Sydney in the 1820s…noisy hawkers squawking their wares on every corner, pimps, prostitutes, ticket-of-leave men, drunken sailors from His Majesty’s transport fleets lurching from sleazy bar to sleazy bar, confidence tricksters in toff’s apparel preying salaciously on the hurrying ladies of the gentry….

Suddenly, stepping out of a swaying black wagon looms a threatening figure, dishevelled and down at heel, caulifowered ears sticking out of a battered face, a ruffian-looking fellow in a stained, crumpled uniform., swinging a knotted baton in his gnarled fist…

Within minutes, the flailing truncheon of the feared Bumper has scattered the rogues and pickpocketing ragamuffins and once again cleared the noisome streets of the human “filth”.

“Yes,” says author Robin Adair,” Bumper would have been quite at home back in those days and would have got on famously with the disgraced London Bow Street Runner and thief-taker who is the hero of my book.”

Adair, 75, has just completed his second novel set in Sydney’s seedy colonial days, called The Ghost of Waterloo and it’s enjoying the same sort of popularity of the recently published and much acclaimed biography of Frank “Bumper” Farrell, by another local senior journalist/author, Larry Writer.

Oh sure, one’s a mystery crime novel and the other’s a true-to-life biography but Bumper Farrell himself had more legends and myths surrounding him to make up a dozen picaresque novels.

Was it true Bumper shot 15 US R&R servicemen in Kings Cross?

Was it true the notorious Newtown “Blue Bags’” front-rower once tackled a draught horse after a boozy night at the local leagues club?

“Yes, that IS true, strangely enough,” says Writer. “Someone made the mistake one day, long after Bumper had retired from football, of claiming he was weak in cover defence.

“This infuriated Bumper, who after a few more drinks,  went outside the leagues club and threw himself into a ferocious tackle on a luckless draught horse that just happened to be nearby.”

Did he really punch a shark unconscious shark while he was out swimming?

“No that one is also definitely not true either,” Writer says.

Was it true then that Bumper used to “commandeer” the Water Police launch and get them to take him home after work, through the Heads, along the northern beaches to North Narrabeen where he’d jump overboard, fully clothed and swim to shore?

“Yes, that one IS true and during my research the story has been verified by not only his family members but many of the police officers who served with him at the time.

“The only dispute seems to be how far Bumper, who was still in his heavy police uniform and belt, actually swam on those particular occasions.. the distances vary from 75 to 25 metres,” says Writer.

In both Writer’s Bumper and Adair’s The Ghost of Waterloo, the authors have spent years of painstaking research verifying their facts and painting thoroughly accurate depictions of their respective eras.

Adair’s first novel Death and the Running Patterer, which won the inaugural Penguin Most Wanted award for new Australian crime fiction, introduces the colourful sleuth, Nicodemus Dunne. He has brought his hero back for his second thrilling novel.

“The Patterer was a roguish character, somewhat like a news-hawker or town crier who used to roam the streets giving out the news of the day to people wandering the streets who may not have been able to read a newspaper,” Adair says.

“In my first novel the Patterer, who was once a Bow Street Runner in London before he was transported to Australia, solves a series of gruesome murders, sometimes using unorthodox methods, a bit like those Bumper may have used,” says Adair, who interestingly enough traces his ancestry back to a grandfather who was a colonial cop and back further to a hanging judge in London.

There’s an even more intriguing twist in Adair’s The Ghost of Waterloo which sees The Patterer involved in solving a big bank robbery (based on a real life incident in 1828 unearthed by the author during years of dogged research).

Some of the evidence points to none other than the Tyrant himself….Napoleon Bonaparte…

Old Boney has a reputation almost as big as Bumper’s, I say jokingly to Adair, how come the emperor who was buried on the bleak South Atlantic island of St Helena some years after losing The Battle of Waterloo in 1815 emerges in far away Australia?

“Ah well, even in those days powerful figures afraid of assassination often used doubles, and maybe one of them took Napoleon’s place in exile and the real emperor cropped up in Sydney,” Adair says.

Adair, a late blooming author, can afford to indulge himself in such intriguing mysteries but for Writer, trying to chronicle accurately the life of Frank “Bumper” Farrell was a minefield.

Luckily he was able to tap the memories of many of Bumper’s police and rugby league colleagues, and Writer particularly acknowledges the help and support of his family.

Writer was able to lay to rest many of the more outrageous legends surrounding Bumper and his vivid descriptions of Bumper’s time on the beat in Kings Cross and his awesome feats as a brutal front-rower for his beloved Newtown make colourful reading.

There are gems throughout the book… I loved the one about when Bumper and a much younger opponent were waiting outside the league judiciary office the night after they were both sent off for brawling during the previous day’s match.

“Why the bloody hell did you have to kick me up the arse for, I wouldn’t have had to hit you back then and neither of us would be here tonight,” Bumper pleaded to his feisty young fellow-offender.

“Well, it was a bloody payback for years ago when you were a copper on the beat and you kicked me up the arse one night when I was a kid on the streets,” the player retorted. They both laughed.

Writer knows his subject well. One of his previous novels, Razor, about the notorious razor gangs of Sydney’s underworld, has been adapted for a new Channel 9 TV series of Underbelly which is currently in production.

Writer does admit it was common knowledge that Bumper used to take some kick-backs from his  days on the beat but he’d pass on most of it on to what Bumper reckoned were worthy causes…such as families doing it tough during the Depression or the nuns from the local convent.

But was he a corrupt copper whose fearsome crime-busting reputation made his superiors look the other way?

“No,” says Writer. “I spoke at length to respected anti-corruption campaigner Bob Bottom about this and if anyone would have the dirt on Bumper he would but he said in all his years of investigations into police graft and corruption, not once was there a reference either on intercept tapes or in written interviews of Bumper Farrell involved in widespread bribery and corruption,” Writer said.

Back to Adair’s work and he admits that there are many similarities between the sordid streets of the Sydney of his novel and those of Kings Cross and the inner-city of the 30s, 40 and 50s.

“Bumper would certainly have fitted into the milieu of The Patterer and probably vice versa,” he admits.

But the last word must go to Bumper and THAT notorious incident which dogged him throughout his life…did he really bite off the ear of opposing prop Bill McRitchie during a vicious game between Newtown and St George on Saturday, July 28, 1945?

“Well, that’s the abiding mystery…never to be solved now that Bumper has gone but, despite overwhelming evidence, Bumper stoutly denied the allegation right throughout his life and even many years after he had retired from the police force, he still refused to say what really happened,” Writer says.

Picture; Sydney author Robin Adair at his trusty old typewriter which he still uses to write his colonial-era novels