THE CHAPTER OF CHARITY! 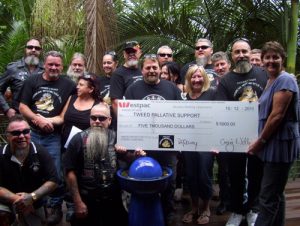 A special group of “bikies” on the NSW far north coast has every right to be called “Angels”.

No NOT “Hell’s Angels”….just angels….for this varied group of motorcycle enthusiasts has provided care and comfort to hundreds of sick children and terminally ill patients in their local area.

In the past two years alone the Tweed Coast Chapter of the American Motor Cycle Club has raised thousands of dollars just from conducting meat raffles in their favourite hostelry each weekend.

The money has been donated to the Make A Wish Foundation for children and the Tweed Palliative Support Care Group for the terminally ill.

So enthusiastic have their club members been in fund-raising that in the past six months they have been able to hand over $5,500 to the Make A Wish Foundation and a total of $10,000 to the Tweed Palliative group.

Visitors to the picturesque hamlet of Tumbulgum on the banks of the fast-flowing Tweed River on the NSW-Queensland border couldn’t fail but notice the glimmering line-up of lovingly maintained Harleys and other classic motorbikes lined up outside the historic Tumbulgum Tavern at weekends.

But don’t get the impression they’re a rough, unruly mob. Far from it.

“The Tweed Coast Chapter of the American Motor Cycle Club was only formed in the early part of 2010.  Like all new things it took a little while to get the club set up and start heading in the direction that we wanted to head.

“We started selling raffle tickets on a Thursday night at the Chinderah Hotel.  Being a weekly visitor to the Tumbulgum Tavern and knowing owners Kit and Helen Gooley since the day they took over the Tumby it was easy to approach them about doing raffles at their pub on a Saturday arvo, which we did the following Saturday, we have basically stuck to meat trays, and quality ones that are often commented on.

“Once we had money coming in on a regular basis we started to purchase a few things we needed, then had a meeting to decide on a charity to support, Make a Wish Foundation was decided on which we make a permanent weekly donation to, as our coffers started to build we then decided to make lump sum donations to The Tweed Palliative Care Group.

“This is something that our club is very proud of, being new and a small club of under 40 members, full and associate members.  All members are on a roster system to have their turn at selling tickets, every Saturday there is a good roll up and all members dig deep into their own pockets to buy tickets as do Kit and Helen and their staff.

“Locals are always very supportive of us and a lot just call in to buy tickets and have a beer and a yak, as for the tourists, they are also very supportive and a lot of them aren’t shy when it comes to talking to us and check the bikes out and quite often them for a photo, some have even been taken for a ride.

“Over the June long weekend every year we run our annual Target run which is open to all comers, other Chapters from Sydney to Bundaberg turn up to fire suction darts from a toy gun at a target board, prizes for winners and losers and a great day and night to be had by all.  This year we had over 130 bikes sign on and all our profits go towards supporting our charities.”

For their magnificent efforts the bikers have been widely praised and have received many glowing testimonials from grateful charities.

One letter from the Tweed Palliative Support groups says: “Wow! What can we say but thank you for your wonderful contributions to our fund-raising efforts.

“Such a generous donation makes an enormous difference to what we’re able to purchase to support our clients.

“We’ve been replacing the older heavier wheelchairs with new lightweight ones and gradually purchasing the comfortable recliner chairs that our weaker, sicker clients so enjoy having the use of.

“The chairs cost more than $2000 each so a large donation such as yours can achieve so much in one go.”

The charity spokesperson said that they are supporting about 120 local people with life-shortening illnesses and contributions not only help getting the patients to and from hospital but go a long way to maintaining their four-suite hospice Wedgetail Retreat in the area.

“This year alone we have managed to open our new equipment shed where we store our beds and wheelchairs plus we’ve had the access road upgraded…thank you very much for your generous support”, the spokesperson wrote.

Ron and his group got in touch with Go55s after we ran a travel article I had written titled “The Day The Easy Riders Came to Tumbulgum.”

They wanted to set the record straight after my tongue-in-cheek article wrongly gave the impression that they were somewhat of a wild bunch, indulging in unruly behaviour in the historic Tumbulgum Tavern.

Far from it, the group was quick to point out and I’ve gladly eaten humble pie.

“Yes John we certainly do go to the pub for a good time but as I explained the money raised doesn’t go on tatts, booze or bling, but on what we think are good causes.”

Ron, who has a forgiving nature and has allowed me to explain myself, goes on to say:

“As I said before, Kit and Helen, who own the Tumbulgum Tavern, love us to bits and we
are always welcome at this magnificent pub by the Tweed River.

“I have never heard one complaint about our behaviour and more
often than not the tourists will approach us to get their photos taken sitting on our
bikes (to which we happily oblige).

“The locals, whether they have a bike or not, have always treated us the same as anyone who has lived in Tumby all their lives, we have never had an issue with anyone.’’

So next time you’re travelling around the scenic Tweed coast area and you decide to drop into the friendly Tumbulgum Tavern, don’t be alarmed if a weather-beaten, leather-clad person comes up to you. They’ll only be wanting you to buy a couple of tickets in the meat tray raffle for their favourite charity.

I know that’s what I’ll be doing when I’m next in the area … because I owe Ron and his mates a beer.

GENEROUS GIFT: Members of the The Tweed Chapter of the American Motorcycle Club hand over their cheque to a Palliative Care representative.