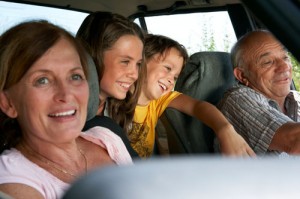 “But Mum, you can’t be serious, you CAN”T be selling your car!”

“Well since your father died, I don’t need such a big car now, it’s very expensive for me to upkeep and lately I seem to be getting lifts from my friends whenever I want to go somewhere.

“And beside I love using my pensioner concession ticket which lets me go for wonderful day trips all over the city.”

June was sticking to her guns. She knew what the next question would be.

“But Mum, what about the kids.”

Exactly, thought June. The kids. She would never admit it but the grandkids were a major part of her life and she enjoyed their company immensely. But all the travel to and from the usual pick-up points…school, day care, sports arenas, pool, dancing classes, sleepovers,.some weeks when her daughter and her equally time-poor husband were particularly busy, she was being run ragged.

They were good kids but she could no longer keep up with their non-stop high energy levels and sometimes driving through peak hour traffic with bedlam erupting in the back seat, she almost lost control of the car.

There was no way she wanted to stop being a huge art of the grandkids’ lives and deep down, she never really intended to sell the car, but she was making a point.

She wondered how long it would take for the penny to drop.

Sure enough that night, her daughter rang to say, if she and her husband agreed to pay for petrol, help out with the rego, insurance and regular services, would she keep the car?

Of course, June agreed and they reached a suitable compromise. She also set out a series of times and days where she could definitely not help out with the kids or pick them up from one of their numerous activities.

How common is this scenario I wonder? The so-called Baby Boomer (and older) generations are stuck in the middle of the Caring Grandparent and Nursing An Elderly Parent syndromes.

Most cope superbly but sometimes when I’m chatting to June I realise how much strain the situation is putting on her ageing resources.

I’m not quoting any expert research here but it seems earlier generations who grew up in the mid and latter stages of the 20th century, were better able to cope with the business of employment and raising families without putting major stress on their parents.

I think the basic difference is from the so-called self-obsessed Y Generation of today is that previous generations wanted to get out on their own, establish their independence and it was a matter of great pride that they were seen not to be “bludging” on their parents.

Anyway, can all this grandparent sharing and elderly parent caring happening these days be quantified?

It was probably no surprise to many recently to discover that an unbelievable figure had been estimated by statisticians examining this very situation.

A study was conducted by the University of Adelaide for the National Seniors Association which carries out extensive research into the standards of the Over 50s in our society.

The report flatly debunked the myth that baby boomers are greedy and selfish, who couldn’t wait to blow the inheritance, splurge on the Winnebago and head off around Australia or take a three-month trip around Europe.

In fact the new research showed that the over-50s stepped in to help out their adult children and elderly parents to the tune of $23 billion in 2011.

TWENTY-THREE BILLION BUCKS!!!! That’s a lot of trips to K-Mart to buy the grandkids a trampoline!!!

“The study shows that baby boomers aren’t the selfish and greedy generation of long-held stereotypes,” he said.

“In fact, it appears that the over-50s are quietly picking up the slack in areas where public policy has failed.

“They’re helping their children through university and into their first homes, and elderly parents with basic living costs and aged care.

Mr O’Neill said the findings sounded a warning to policy makers who were using the sheer size of the baby boomer generation to justify a shift to a greater user-pays social system.

“Baby boomers won’t be a burden. They’re already paying – quite happily – for their children and their elderly parents.

“The more governments take from this group, for example in cutting superannuation concessions, the less capacity they’ll have to provide help across generations,” he said.

The study also found that the over-50s give $30 billion in practical assistance to family members, based on the average weekly earnings hourly rate. This includes care of grandchildren.

Meanwhile, another study of seniors aged 55 and over has revealed that the type of neighbourhood you live in is related to your general health, mental health and quality of life.

The report showed a direct link between varying neighbourhood characteristics such as social cohesion (trust, belonging) and disorder (presence of vandalism, graffiti) and how this impacts on ageing well.

It found good general health was linked to a sense of belonging (people ‘felt more a part of their area’), trust (‘felt people in the area could be trusted’), and helpfulness of people in the neighbourhood.

Better general health was also associated with a sense of neighbourhood order (few problems of vandalism, graffiti or rubbish), and feeling it was safe for people to walk in their neighbourhood after dark.

Mr O’Neill said the study supported a growing body of research providing evidence that where we live can impact on our happiness and overall health.

“Recognition is growing regarding the importance of the neighbourhood environment we live in and how it can shape our health, independence and happiness into later life,” he said.

“With Australia’s ageing population it is vital that policy makers understand the factors that enhance the ability of older adults to retain independence and wellbeing as they age.”

The authors of the ACT study were Tim Windsor from Flinders University, Elissa Pearson from The University of South Australia and Dimity Crisp, Peter Butterworth and Kaarin Anstey from The Australian National University.

A full copy of the report is available from www.productiveageing.com.au

WHEN IT COMES TO TV, IT’S THE SPORTING LIFE FOR ME!