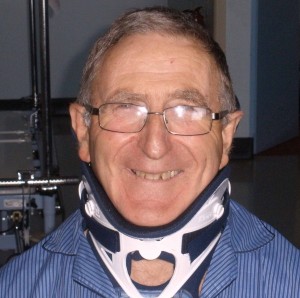 AS they carefully wheeled him into the open doors of the Beechcraft B200 King air ambulance at Port Macquarie airport, Ray Ham knew it was going to be a harrowing ordeal.

His neck was stabilised in a rigid heavy-duty spinal collar and his whole body encased in a special pressurised stretcher that left him feeling as if he was in a stifling cocoon.

He’d just suffered an horrific accident in the surf and it was suspected he had sustained serious spinal damage.

As the air ambulance flight director strapped the stretcher into the fuselage of the twin-engined turbojet, Ray’s face was barely centimetres from the aircraft’s roof and he began to hyperventilate.

“It was pretty claustrophobic I can tell you…I was having trouble breathing…and all I could keep thinking about was the film I saw recently about the air ambulance which ditched into the Pacific off Norfolk Island,” Ray said.

“I said half-jokingly to the flight director ‘does this thing float if we have to ditch’ and he just laughed and said they had no intention of ditching,” Ray told Go55s.

“The weather wasn’t all that flash and I knew it was more than a two hour flight and all I could see was the roof of the aircraft shuddering and vibrating as we took off and headed to Sydney in strong wind conditions.

“I remember being in absolute awe of the pilot who showed amazing skill in flying through all that turbulence but managing to keep the aircraft as steady as possible. He was absolutely brilliant.

“I guess I was lucky to be in such capable hands and when we landed at Sydney and they took me by road ambulance to Royal North Shore’s Spinal Unit, I knew I had other things to worry about,” Ray said.

The 71-year-old was lucky alright. The hospital X-Rays showed that he’d suffered a nine millimetre displacement of the C2 vertebra in his spinal column.

A major medical website explains: “A fracture of the “pars interarticularis” on the pedicle of the C2 vertebrae (axis) is often called a “hangman’s” fracture. This term was coined on the observation that these were the types of fractures seen in hanged criminals. This type of fracture is the most common of all cervical spine fractures and it is often caused by extreme hyperextension to the neck when the face/head forcibly strikes a hard surface.”

Ray’s neck was broken at the C2. He learnt that later. He knew also he would be in the intensive care unit for a long time not knowing exactly how critical his condition was.

Medical experts agree that because of C2’s proximity to the breathing control centre of the brain, at the apex of the spinal cord, Ray is not only lucky not to be a quadriplegic, he’s lucky to be still alive.

But he WAS still alive and still had some movement in his body. For the next few hours he underwent a series of CAT scans and numerous other tests to determine the effect of the injury.

Finally, the spinal surgeons told him he’d need a major operation to fuse the displaced vertebra. They told him it was a tricky procedure and Ray, a seasoned surf and ocean swimmer, began to wonder if he’d ever walk again or whether he’d finish up a quadriplegic.

The retired high school principal from Grange in South Australia had been holidaying in the far NSW north coast town of Port Macquarie with his wife Lyn in early September and had linked up with a group of local winter swimmers and surf club veterans.

It was the last day of his holidays and he decided to go for a final late afternoon swim before heading home.

“It was a pretty murky sort of day with choppy conditions, gusty winds and a strong north-south

drag along the  shore at Flynn’s Beach,” Ray said.

“There were a few young blokes out on their boogie boards but the surfing conditions weren’t ideal.

“I thought I’d just have a quick dip, try and crack a body wave and not stay in too long.

“There were quite a few dumping sets coming in and what with the strong shoreline pull I was having trouble keeping my feet.

“After a while I ducked under a wave and as I came up I suddenly saw this kid on a fibreglass boogie board dropping off the top of the next wave.

“As the wave collapsed, he came right down on top of me and as I tried to dive away from him, I felt a heavy thud on top of my head.

“ I remember the kid asking me if I was alright but I could feel pins and needles coming down my arms. I began to stagger out of the water, I felt pretty woozy but I guess I was lucky that I didn’t pass out as I could’ve been swept underwater by the current and dragged along into deeper water.

“That would have been it. But I made it to shore and headed up the beach to the surf club where I saw one of my new-found winter swimming mates from the Port Macquarie Walruses unloading a trailer.

“I said to him ‘did you see what happened to me out there?’ and he said no. I told him I’d been nutted by the boogie board but I wasn’t feeling too bad and I’d have a shower and go home.

“But he wouldn’t hear of it. He immediately told me he was calling an ambulance and he then stabilized my neck with a collar and he and another surf club member put me down on the spinal stretcher.

“I was starting to feel pretty dozy at this stage and when the paramedics arrived they were full of praise for the way the surf club blokes had immobilized me.

“They told me if it hadn’t been for them, I could have been paralysed for life…or dead. Thank God they were there on the spot,” Ray said.

At first the ambulance officers were going to transport Ray to John Hunter Hospital but instead decided it would be quicker to get the air ambulance straight to Sydney.

“As I look back on that day now, I know that the wonderful care I received from both the surf lifesaving club members at Port Macquarie and the ambulance crews saved me from life in a wheelchair,” Ray said. “I’ve already written a letter to them thanking them for their expert care.”

Ray said his next most vivid memory was waking up in the spinal ward after his three-hour procedure and seeing the smiling face of the surgeon leaning over him saying the operation had been a complete success.

After just a few days Ray was able to get out of bed and walk with a frame around the hospital corridors. His neck will be encased in the spinal brace for many weeks while the spinal cord mends.

It’s early days yet of course but as he recovers in his beachside home at Grange and relives his ordeal with his four grandkids, he knows that he will still hanker to get back into the surf and even take part in another of his beloved ocean swims.

Ray has been a brilliant musician all his life and has excelled in many instruments but he’s also hoping to get back soon to another of his favourite pastimes.

“I play keyboards in a little jazz group called the Bertie Wooster Trio with two of my other 70-year-old mates John Jungfer on drums and Chris Harvey on ukulele and before my accident we were getting a lot of gigs around town at places such as Suzie Wong’s. We even attracted some of the younger people there who just loved our style of music,” he said.

But he admits he’s not sure how long it will be before he’ll feel comfortable standing up at his funky keyboard and banging out a tune. “I’ll have to be careful not to do any head banging numbers,” Ray laughs.

But he knows deep down he’ll never forget that anxious flight down in the tiny air ambulance and how close he came to spending the rest of his life as an invalid.