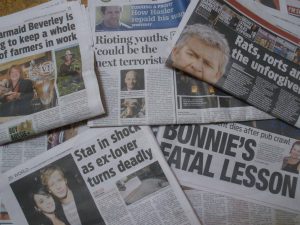 I was having lunch with a few old journo cobbers recently at the Manly Wharf Hotel and discussing the old times.

As usual, we had ordered the $15 “pensioners’ special” of pizza and a glass of wine. As usual, none of us stuck to the single glass of red.

Vintage bottles soon spread along our outdoor table as the Manly ferries came and went disgorging their harried commuters and milling tourists.

But we were in a world of our own. As the wine flowed, we began to raise a toast and it was always the same one “To The Glory Days Long Gone”.

Each of us had retired from mainstream journalism after 40-year careers. Some of us had been editors of major metropolitan newspapers (sadly, not me), others had been top ranking sports reporters, covering multiple Olympics and following the Australian Test cricketers and rugby players across the globe over many decades. Others had been overseas bureau chiefs and some had made the transition from newspapers to investigative television current affairs.

Some, like me, had spent most of our careers as crime reporters. Many of us had worked for fabled newspaper editors such as Zel Raban and Brian Hogben in Sydney and Cec Wallace and Lyle Turnbull in Melbourne. I’ll even give Ita Buttrose a guernsey as she was a brilliant editor-in-chief of the Sunday Telegraph when I first worked there in the 1980s.

As we reminisced most of the memories revolved around the great days of newspapers..the meteoric arrival of the Murdoch and Fairfax regimes in which many of us spent long careers. Print-wise, both empires are now in terminal decline.

We recalled with awe the great reporters of the day…Bill Jenkings, Bill Archibald and Ced Culbert of the Daily Mirror, The Sun and Daily Telegraph in Sydney and in Melbourne the legendary Geoff Clancy of the old Herald and Jack Darmody and Kenny Hooper of The Age. Photographers such as John O’Gready and the recently deceased Warwick Lawson.

We paid homage to our old mentors, in my case the gangling, laconic bush poet and writer Geoff Wright (who acted as a last minute “father” for my just arrived English bride at our wedding 30 years ago and at which he penned these lines: “I only met the beautiful bride today and bugger me, I had to give her away!!”

In my cadetship days, I ran into Geoff as I was heading into the Herald and Weekly Times building for a job interview. “Who are going to meet?” Geoff asked. I told him and said: “Before you go in to see him, go and polish your shoes, they’re bloody filthy!”

I raced into the nearby shopping mall and spent a few bob on one of those shoe buffing machines and went into the interview. I got the job.

We laughed at the old tales, of the great wars between the rival afternoon newspapers. My old mate, newspaper and radio veteran Frank Crook remembered getting into deep strife one day when he dialled his former newspaper (their phone numbers were almost identical) and filed an exclusive yarn which was gleefully splashed on the front page by his opposition much to the horror of his new editor!!!

Crooky is also famous for telling his photographer mate the legendary Russell McPhedran not to take any photographs of an outrageously noisy rock band who lived over the road to their London suburban flat when both were working in Fleet Street in the early 1960s. The band were the Rolling Stones.

But among the funny yarns, were the sad ones too. Most of us remembered the first fatality we ever covered.

Mine was a teenage schoolgirl on her way home from school who was crushed and buried under masonry after a brick wall collapsed onto the footpath at a construction site in a suburban street.

I watched as the ambulance and fire brigade officers dug her frail little body from underneath the rubble. Bystanders were weeping as they placed a blanket over her grey shrouded remains.

Hours later when I was interviewing her distraught parents, her mother asked me if I had been there when her daughter’s body was taken from the scene.

I told her that I had been and she said: “She was always such a modest little thing, was her skirt covering her legs? That’s the way she would have wanted to be found.” I replied that she looked like a little lost angel and that she had a serene smile on her face.

Not too many years later I was knocking on the doors of the family homes of the young Diggers whose bodies were being shipped back from the horrors of Vietnam. More grieving mothers. More tear-strained faces.

How can I ever forget those mother’s tears? All those years have passed and I’ve covered death and mayhem all over the place but those sad faces, eyes brimming, remain with me.

Back in those so-called Golden Days, we all lived by the age old journalistic mantra of When In Doubt, Check it Out. If Still in Doubt, Leave it Out!.

We lived in fear of the gnarled, chain-smoking sub-editors who scanned our copy and turned our deathly prose into perfect English. They rewrote our pedestrian intros and created dramatic, eye-catching headlines irresistible to the eager readers who bought the newspapers every day. A dying breed now.

Sure we got it badly wrong over the decades, but remember we worked tirelessly to expose the scoundrels and cheats, to unearth the true heroes, to help chase down the rapists and murderers. We hoped that these rights far outweighed the wrongs.

In those days, celebrity-based stories were only in the major news pages if they involved a death, marriage, divorce or family addition.

Nowadays we pick up the newspapers to see them littered with errors, meaningless badly punned headlines, childish factual mistakes and appallingly trivial stories about minor “reality TV” celebrities “Belinda Reveals: I Was Bullied at School!”

Monstrously garish “house ads” spread throughout even from the front page through to Pages 2 and 3, once the sacred repository of the main news stories of the day.

As we sat around that wharf hotel table we lamented the fact that the newspaper companies were now selling their souls through the digital media streams and “pooling” and “outsourcing” their sub-editorial product with horrifying results.

It is people of our generation who are facing the terrible decline of the newspapers of old. OK we’ve made some bloody awful mistakes along the way (the dreadful phone hacking scandal in the UK is an extreme example) but believe us, most of us had that fierce unquenchable pride in “the game”.

As we raised our glasses in the late afternoon and toasted yet again “To The Glory Days”, I hope that you, dear reader, will share our nostalgia, forgive us our past sins, and sing our praises for when we got it right.