The Old Adelaide Gaol stands on the south bank of the River Torrens, massive and silent. The thick stone walls, guard towers and block-like cells leave visitors in no doubt that from 1841 to 1988, this was a prison designed to dehumanise and isolate its inhabitants; those that the justice system had decided, for their crimes, to remove from society.

Elizabeth was born in Burra, South Australia, in April, 1848, to Cornish parents, John and Elizabeth Oliver. Like many of his countrymen, John had mining in his blood, and the family enjoyed the camaraderie of a strong community, tapping rich copper reefs in the dry hills around the town.

Like many others, the Olivers lived in a home burrowed into the banks of Kooringa Creek. In June 1851, a major flood swept down the waterway, sending a churning wave of destructive water through these underground abodes. At least one man was drowned trying to retrieve his belongings, and it’s likely that the Oliver family lost everything they owned. These were tough times, and neither of Elizabeth’s younger siblings, John and Catherine, survived early childhood. 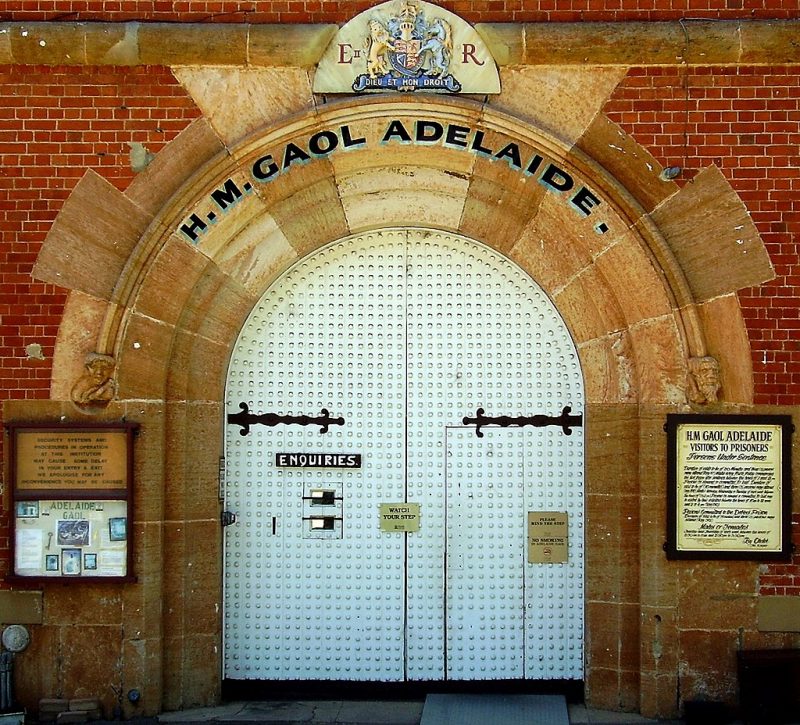 When Elizabeth was five years old, her mother left home. John, living at least temporarily at Tynte Street, North Adelaide, placed the following advertisement in the South Australian Register: This is to certify that my wife, Elizabeth Oliver, has left her home without any just cause or provocation. I will not be accountable for any debts she may incur or contract after this date.

Unable to stay away from the mining way of life for long, John followed thousands of other gold seekers across the border to Ballarat, hunting the yellow metal while trying to care for his little girl. He staked a claim at Creswick Creek, and Elizabeth was often left in the tent alone when he went out to work, though she was likely to have attended the local school after it opened in 1854.

It was a difficult time. Elizabeth was still a child when the Eureka Rebellion swept through the area. John Oliver played at least a minor role. It seems likely that his daughter was a witness to at least some of the violence that erupted between the diggers and police.

When Elizabeth was seven, she was alone in the tent when an itinerant by the name of George Shawshaw came to the flap and asked for a smoke. Elizabeth gave him her father’s pipe, and when he had finished smoking he seized her by the throat, half suffocating her. He then raped her, a crime so vicious that the judge called it “one of the most atrocious cases” he had ever presided over. Shawshaw was sentenced to death by hanging, though this was commuted to a long jail term.

Elizabeth’s injuries were so severe they left her unable to bear children. A local doctor gave her opium for the pain, the beginning of a lifelong addiction, and more changes were on the way. While still a girl she was engaged as a servant to a Mr Lees, a Creswick chemist. Through her early teens Elizabeth had a steady supply of the drug she craved. At fifteen she left her employment and moved to Ballarat, living in a boarding house that may have doubled as a brothel. She was using opium and supplying it to prostitutes, a trade in which she may have been employed herself.

Elizabeth’s mother, during this period, had remarried. A few years later, despite facing bankruptcy in 1862, the elder Elizabeth started looking for the daughter she had abandoned so many years earlier.

After receiving a message from a travelling minister, in 1864 Elizabeth moved in with her mother and stepfather at another Cornish mining stronghold in South Australia, Moonta. At this point, for a while at least, the young woman had something of a normal life. Her mother and stepfather were active in the Wesleyan Church, and Elizabeth became a Sunday school teacher. She also took up employment as a servant to a local widower, Thomas Woolcock.

When Elizabeth’s stepfather heard rumours that Woolcock was enjoying sexual favours from her, he threatened to break her legs. Undeterred by the threat, she married her employer, despite warnings from her stepfather that he was a bad type of man. During this time her drug addiction continued, using morphine obtained legally from local chemists.

Woolcock, however, was strict, violent and unpredictable. He found fault with her housekeeping, and accused her of having an affair with a boarder called Tom Pascoe. Then, when his dog died suddenly, he suspected that Pascoe might have poisoned the animal. The canine’s rotting body was later exhumed and tested, with high levels of mercury found in its internal organs.

Pascoe was certainly Elizabeth’s co-conspirator in obtaining opium, along with a powder that was most likely precipitate of mercury. He sometimes acted as her representative, using handwritten notes in false names. Her stepson, Thomas John, was also enlisted for this purpose.

As Elizabeth later wrote: “I was not married long, before I found out what sort of man I had got, and that my poor stepfather had advised me for my good. But was too late then so I had to make the best of it. I tried to do my duty to him and the children but the more I tried the worse he was. He was fond of drink but he did not like to part with his money for anything else and God only knows how he ill-treated me. I put up with it for three years, during that time my parents went to Melbourne and then he was worse than ever.” 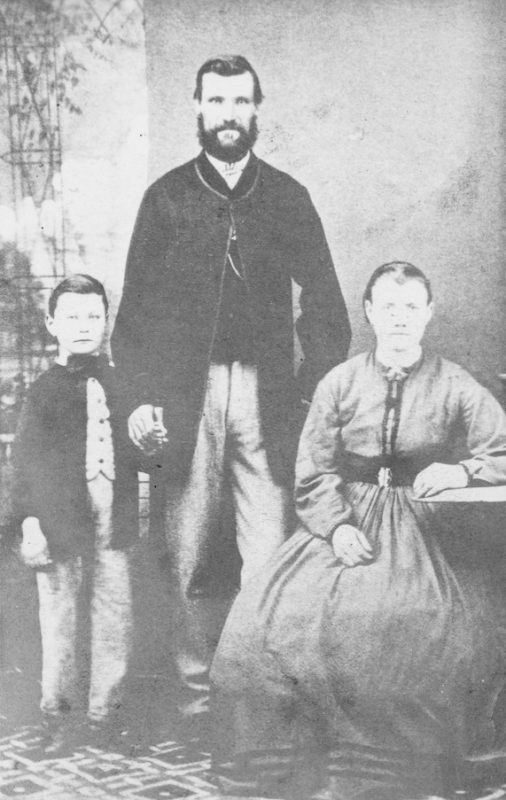 Periodic attempts to leave home and run for Adelaide did not help, for Woolcock tracked her down and dragged her back. Addicted to opium, and trapped in an abusive marriage, Elizabeth tried to hang herself. The plan would have succeeded but for the weakness of the beam she tied her rope to – it broke when she kicked away her chair.

When Woolcock fell ill, Elizabeth consulted a series of doctors, giving at least the appearance of trying to save her husband. Nothing seemed to work.  Thomas slid towards death, and on the 4th of September 1873 the undertaker called to collect his body.

The local rumour mill went into overdrive. After all, Elizabeth’s desperate need for opiates was well known, and rumours of an affair with Tom Pascoe had kept tongues wagging for months. An inquest was convened and the finger was pointed at Elizabeth. She was charged with murdering her husband by mixing toxic mercury powder into his food, and sent to trial.

The jury had no trouble finding her guilty, and she was sentenced to be hung by the neck until she was dead. It is ironic that Elizabeth’s rapist was granted clemency, and spared the rope, but she herself was not, despite a recommendation for leniency from the jury.

Most death sentences were carried out after twenty-one days, but Elizabeth had twenty-six because they did not want to hang her on Christmas Day. On December the 30th, Elizabeth was led from her cell in the company of her last confidant, Reverend Bickford. The hangman placed a noose around her neck, allowing the regulation amount of slack, then finally released the trigger that caused the trap door to fall away. After hanging for the prescribed period of one hour, she was pronounced as deceased, then buried between the inner and outer gaol walls.

Over the years, some researchers and historians have argued that Elizabeth was convicted on the flimsiest of evidence. A petition was circulated to have her conviction posthumously quashed. The suggestion received short thrift from the attorney general, but some doubt does remain.

The physical evidence that Thomas Woolcock (and his dog) died from mercury poisoning was not conclusive by modern standards. The cause of death was initially given as “pure exhaustion from excessive and prolonged vomiting and purging.” Mercury was found, however, in dangerous levels in his organs, particularly his stomach, much more than could be attributed to the small amount in some of the medicines he was prescribed.

A letter from Elizabeth, addressed to Reverend Bickford, was handed to the Adelaide Observer after the hanging. The newspaper published it in full, with this damning confession only adding to the public’s interest in the case: “I was so ill-treated that I was quite out of my mind and in an evil hour I yielded to the temptation. He was taken ill at the mine and came home and quarrelled with me and Satan tempted me and I gave him what I ought not.” Believers in her innocence assert that she only made the confession to impress her penitence on Reverend Bickford, who had been the minister at Moonta and whom she admired.

Whatever happened, Elizabeth was a tragic figure: the victim of careless parenthood, a savage crime and a violent marriage. Years of substance abuse may have been her way of coping with the demons of the past. She remains the only woman to be executed by the South Australian government, and a figure of mystery, sadness, and intrigue.