From Maralinga to Maroubra – Eric Bouvier 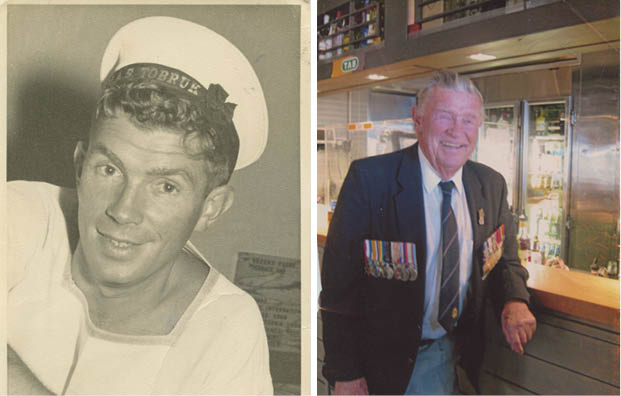 Eric Bouvier was born in 1929 in Shanghai where his father was a British police officer at Ward Road Goal. The family lived ‘a pretty comfortable life’ but migrated to Australia in 1939 at the start of World War II. In Shanghai they lived in an area – later bombed by the Japanese – outside the international settlement where consulates and embassies were located.

The lived at Kings Cross, then moved to Ramsgate where his father bought a business then to Canley Vale after buying a house there.

After finishing school Eric did a variety of jobs but was ‘knocking around with a bad crew’. He had long had an ambition to join the navy and at 20 years of age he did this with three others and eventually served for 15 years.

He saw service on a number of different ships and recalls several memorable incidents including Queen Elizabeth II’s firs tour of Australia in 1954 when naval ships escorted the Royal Yacht Britannia around the Australian coastline.

He served on HMAS Australia and did a bricklayers course, which he says, ‘resulted in him getting asbestos in his lungs’. He also served on HMAS Kuttabul then HMAS ANZAC, refurbished in 1965, whose captain was regarded by the crew as a true bastard. When the Queen came on board, the crew had to wear their whites or full uniform. When in Honiara they had lined up a game of football with the Dutch, the crew wishing to wear shorts but the captain enforced the full uniform rule so they said they would not go ashore in the blazing heat. They won and were allowed to wear their sports gear. The captain cried ‘mutiny’ and later when he received an award from the Queen the whole crew booed him.

Eric then served on the Tobruk where the captain was a ‘top bloke’. He was a leading hand but on Manus Island he had his ‘hooks’ taken off him for an offence. On another occasion when he went ashore in Bangkok he met an American who had not had potatoes for a while so Eric pinched some from the ship, put them in a Gladstone bag and gave them to hm. The American took them to a menagerie where Eric bought a monkey. Took it back on board in the Gladstone bag but when he was ordered to open it the monkey jumped out. Eric tied him up in the chief stoker’s office. The next morning the chief stoker found ‘crap everywhere’ in his office. As a result the captain forbade him to take it back to Australia and Eric gave the monkey away. After he told this story at reunions of the Vengeance they gave him a stuffed monkey.

When the Queen visited he was serving on the ANZAC which was escorting her to Fremantle. Here he went ashore to the Freemasons Hotel, had a few beers and stole a jar of bonbons from a shop, then handed them out to people in the street to celebrate her visit. The police stopped him and he told them he found them in Perth. They threw him in the lock up until the stoker bailed him out. He went to court with his boss the engineer officer representing him. The ‘beak’ was a ‘severe bastard’ and didn’t believe a word Eric said. He was fined two shilling and sixpence. This story got into the newspapers and there were headlines on the front page: ‘Bitter sweet venture’. When he returned to the Freemasons Hotel he got razzed so went to a nearby shop and bought a jar of bonbons. They all thought he’d done it again.

He was shipped back to Sydney from New Guinea for getting drunk and refusing to leave a ship. A chequered career indeed.

When he was anchored off Trial Bay he received a Morse Code message that his wife had miscarried in Gosford Hospital. He couldn’t get off the ship any other way than swimming ashore, so he put his gear in a bag, held it over his head and swam in. He hitch-hiked to Gosfrod to see his wife.

In 1960 Eric was posted to Maralinga where the British Nuclear Test Programme (1952-1963) was under way. In Eric’s words prime minister Robert Menzies said to the British, ‘I’ll give you part of the country, drop the bomb there’. At Maralinga the navy was in charge of the powerhouse and the water supply and Eric also drove a truck to the bores to collect water to put through evaporators. Service personnel lived in ‘dongas’ with no air conditioning and worked four hours on eighth hours off.

Eric witnessed three atomic tests during his time at Maralinag. Prior to these, the scientists informed them when a bomb was to be tested but on the day the only safety measure was they were told to turn their backs on the blast. Eric believes that it was a result of radiation from these tests that his wife had three miscarriages. This has not been confirmed by doctors and he received no compensation, whereas British servicemen did. He is, however on a good pension as compensation for exposure to asbestos.

Eric lives in a home unit at Maroubra that he bought in 1965 and every Saturday volunteers for timekeeping with South Juniors. He is a Maroubra local, considered a protected species by the local surfers and an honorary ‘Bra Boy’ by the boys. He still swims nearly every day, has a walk and enjoys a punt and a beer with all the young blokes form the area, who keep an eye out for “froggy’, a Maroubra local and a true character with just a touch of larrikin.

Some Like It Hot: Spicy Food Linked to Longer Life